The PLSS has a long history in the U.S. as the dominant system of describing and dividing land west of the Eastern seaboard. Only a few areas of Wisconsin were settled early enough to have legally recognized land boundary systems in place prior to the PLSS being developed here. Generally, these are land grants in the Green Bay area, early French (and then American) settlements in Green Bay and Prairie du Chien, and early Indian reservations. 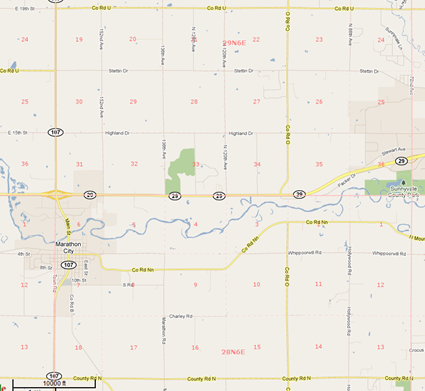 At the most basic level, the PLSS can be described as:

The Public Land Survey System (PLSS) has a profound affect on how society operates in Wisconsin; however, it is such an underlying factor that most of us are unaware of it on a daily basis. The PLSS is the fundamental way that almost all of the state’s land was first systematically marked, divided, and described, and remains the basis for that real property today. Features of the PLSS are depicted in various ways on a variety of maps.

Some effects of the PLSS are very visible. Grid-like layout of public roadways, common especially in flatter rural areas that don’t have a high concentration of lakes or wetlands, is highly reflective of PLSS boundary lines. Some roads even carry names such as “Range Line Road.” Farm fields often are laid out following the PLSS, creating rectangular patterns especially obvious from the air. In addition, some rural land parcels may be casually termed “the back forty”.

On the other hand, the fundamental parts of the PLSS are almost invisible. The marked corners (e.g., “section corners”) that are the most basic feature of the PLSS are not very obvious in the field. These corners, and the lines that connect them and that form the boundaries of land parcels, appear on a wide variety of maps, helping us understand the division, ownership, and location of real property. A key fact is that the original placement of PLSS corners is what controls most property lines. Modern monuments positioned incorrectly do not change property boundaries.

This explanation of the PLSS covers its origins, patterns, maintenance, use as a spatial reference system, and curiosities. We start by describing maps that show the PLSS, then point to several sources of coordinate values. More information can be found in this document titled “Understanding Wisconsin Township, Range, and Section Land Descriptions“.

The PLSS in Wisconsin was put in place essentially continuously beginning in 1832 and concluding in the north in the 1866. Township boundaries were surveyed first; sections were filled in later. A variety of contractors did the work for the General Land Office (GLO). Surveyors followed written “Instructions” from the Surveyor General (located in Cincinnati, OH through 1839, then relocated to Dubuque, IA); instructions changed through the years. A field crew typically was composed of a deputy surveyor (the crew chief), two chainmen (since the distance-measuring device of the day was a chain measuring 66 feet), an axeman/marker, and (in open country) a flagman. 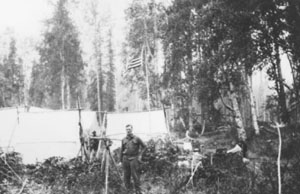 A camp setup for a surveying team.

The survey crews’ work was documented in field notebooks. The original notebooks are in custody of Wisconsin’s Board of Commissioner’s of Public Lands. Microfilm copies are held at the State Historical Society. The original notebooks were scanned in 2001 and are viewable over the Internet through a cooperative project of BCPL and the University of Wisconsin-Madison’s General Library System. Due to yellowed paper, faded ink, the florid style of penmanship common during the 19th century, and the use of surveying terminology (often abbreviated), it may be difficult for many people to easily understand the contents of the field notebooks. There is no known comprehensive digital text version of the notebooks; some pages may have been transcribed but there is no index or summary to assist in locating them. Hand written copies were provided to each county around 1900, but these copies may not be retrievable in any particular case. 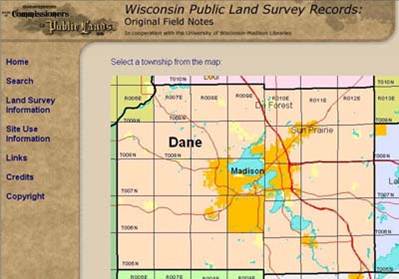 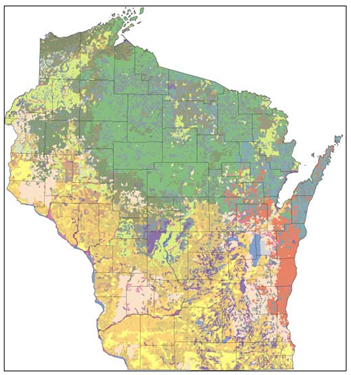 Map of the Original Vegetation Cover of Wisconsin.

The surveyors not only marked and documented the PLSS as they installed it. They also generally described the countryside and, more specifically, noted the crossing of streams, wetlands, blown-down timber, etc. When setting corners, they often relied on nearby trees as references to the location of the corner. Collectively, these landscape observations represent the earliest systematic information about the state’s vegetation. Careful study of the notebooks can be used to construct vegetation data, although due to the wide spacing between corners it may be impossible to infer what vegetation existed at other points. An interpretation and manual compilation by Finley resulted in a 1:500,000-scale map published in 1976.

None of this information should be construed as being a substitute for the expertise of a professional land surveyor.