Rural land parcels today are usually no larger than about 40 acres. A legal description of such a parcel might be, for example, “The NW 1/4 of the SE 1/4 of Section 5, T3N, R11E, more or less 40 acres.” However, a single land transfer may group together a number of parcels, such as “The north half of Section 26, Township 7 North, Range 3 West.”

Since a section, or its component quarters or quarter-quarters, can never measure out exactly to its nominal area, care in writing legal descriptions is important. A 1/4-1/4 section is nominally 40 acres, but may actually be more or less, sometimes quite a bit different. Transfer of property as “the north half” of a 1/4- 1/4 section would not be exactly 20 acres; similarly, separating the “east 10 acres” of the same section wouldn’t leave exactly 30 acres.

Subdivisions generally will be based on a plat which results from a land survey and placement of monuments at lot corners. Typically the plat will be referenced to the PLSS as the underlying framework. 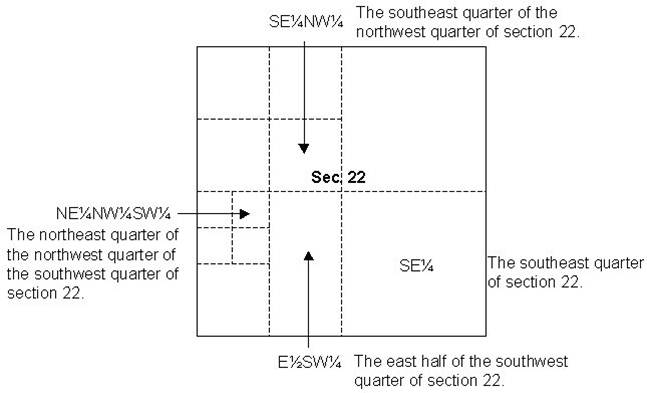 This method of property description has a long history and is probably the most understandable to people unfamiliar with surveying methods and jargon. Essentially, the description follows a path around the perimeter of a piece of land, calling out a series of points (and the lines between them) that are related to each other by geometry. The starting place on the perimeter is called the Point of Beginning (POB) although the survey may be anchored to a Point of Commencement (POC) such as a nearby PLSS corner. The POB typically is marked by a monument or prominent physical feature, and other points along the described path may be similarly marked. 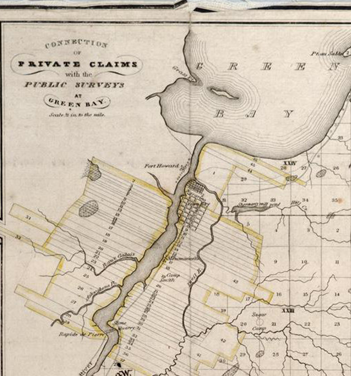 Green Bay survey from 1835.  Note the long lots in the center.