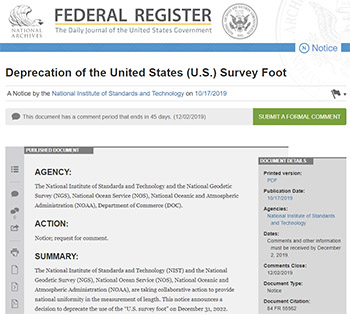 A Federal Register Notice (84 FR 55562) published on October 17, 2019, announces that the US Survey Foot will be officially deprecated on December 31, 2022. The action is being taken by the National Institute of Standards and Technology (NIST) and the National Geodetic Survey (NGS). After December 31, 2022, the US Survey Foot will be superseded by the International Foot. However, the International Foot will be known simply as the “Foot.”

This action by NIST and NGS is “designed to establish national uniformity in length measurements based on the foot.” The existence of two definitions of the foot in the US stems back to a 1959 Federal Register Notice (24 FR 5348) defining the “International Foot” as 0.3048 meter and establishing the term “US Survey Foot” for the historic 1893 value of the foot used for geodetic surveys. The US Survey Foot was defined as 1200/3937 meter = 0.304 800 61 meter (approximately). While the difference between the two definitions is only 2 parts per million, this discrepancy can accumulate over large distances to cause significant errors and confusion.

The US Survey Foot is used extensively across the country and is specified in state statute (or Federal Register Notices) for 40 states, including Wisconsin. Because of “a long history of misunderstandings and confusion over which definition of the foot was used to carry out a specific land survey or civil engineering project” NIST and NGS will deprecate use of the US Survey Foot as a component of the NGS’s plans to modernize the National Spatial Reference System (NSRS) in 2022. According to the FRN, the NIST’s authority to mandate this change is vested in the US Constitution.

After December 31, 2022, use of the US Survey Foot is to be avoided. Thus, “any data derived from or published as a result of surveying, mapping, or any other activity within the U.S. that is expressed in terms of feet shall only be based on the ‘foot’ equal to 0.3048 meter (exactly), formerly known as the ‘international foot’ in the 1959 Federal Register notice.” This also applies to the US Survey Mile as well as other measures previously based on the Survey Foot, which will “be defined using the foot equal to 0.3048 meter (exactly)…. These measures are the ‘chain,’ ‘link,’ ‘rod’ (also ‘pole’ or ‘perch’), ‘furlong,’ and ‘fathom’ for length, and the ‘acre’ for area.”

According to the FRN, the US Survey Foot will not be supported in the modernized NSRS after 2022, “including the State Plane Coordinate System of 2022 (SPCS2022), elevations, and all other components of the system. However, the Survey Foot will be permanently maintained in NOAA [NGS] products and services for legacy applications, for example the computation of SPCS coordinates in States where it was specified for SPCS 83, and for all zones of SPCS 27.”

NIST and NGS solicit “comments and suggestions from land surveyors, engineers, Federal, State and local officials, equipment manufacturers, and the public at large who are engaged in or affected by surveying and mapping operations for ways that the two agencies can help facilitate an orderly transition to a single definition for the foot.” A second Federal Register Notice is planned by June 30, 2020. However, the decision to deprecate the US Survey Foot has apparently already been made, and the public comment period is an opportunity only to identify unforeseen issues.

NIST has posted some tools and resources here.

This issue is being examined by WSRS2022 (the Wisconsin Spatial Reference System Task Force) which was organized in 2018 to help facilitate Wisconsin’s transition to the NGS’s modernized NSRS in 2022. The Task Force is interested in hearing your feedback. For a list of Task Force members (and other information) please visit the WSRS2022 webpage.

An earlier Wisconsin Geospatial News posting on this topic can be found here.