A variety of map types include a representation of the PLSS. These maps cover a range of scales and accuracies. 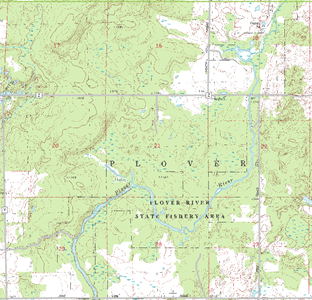 The most common general base maps covering the entirety of Wisconsin, the U.S. Geological Survey’s topographic map series, all depict the PLSS. The sources from which these compilations were constructed are varied both in spatial accuracy and time, and the resulting mapping does not meet a single standard. At the largest scale (1:24,000) these maps show section (and quarter-section) corners (and, implicitly, most meander corners) and section lines; all sections are numbered, and towns and ranges are labeled. Corners for which the best information was available are identified with a point symbol. In places where the water in reservoirs has covered land originally surveyed, submerged corners and lines are shown.

At smaller scales (1:100,000 and 1:250,000), USGS topo maps have a simpler representation of the PLSS. Information quality for corners is not symbolized. Only sections 1, 6, 31, and 36 are labeled. In the best case, the accuracy of PLSS depiction is limited by the map scale. (In the context of map accuracy standards, note that PLSS corners do not qualify as “well-defined points” and that only rarely can evidence of their precise location be seen in aerial photographs).

Scanned USGS topographic maps are available for viewing through The National Map Viewer. Note that the new US Topo product available from the USGS does not include PLSS data.

The USGS topo map series are commonly used as source material for other maps. A more straightforward derivative is the DRG, a scanned version of the USGS topo map. In both paper and in digital form, private companies have used information (including the PLSS) from USGS maps to construct value-added products. Examples include DeLorme’s paper Atlas and Gazetteer series as well as digital products (e.g., TopoUSA), and the National Geographic’s TOPO! digital series.

The Wisconsin Dept. of Transportation’s set of black-and-white county road maps include a rudimentary representation of PLSS sections. Only sections 1, 6, 31, and 36 are labeled. Town and Range numbers are included. County maps that are designed for general purposes often include at least a basic representation of the PLSS. Such maps are produced by counties or private mapping firms.

Probably the most widely used maps that rely heavily on the PLSS are those that make up plat books. Typically, there is one page devoted to showing the real property parcel layout in each PLSS township.

This group of maps has the single purpose of showing the layout of real property parcels. The PLSS plays a fundamental role in constructing these maps and appears in detail. Parcel maps do not adhere to a single accuracy standard and some are rather dated. There may be situations where more than one location is shown for a single section corner, as markers in the field and even professional land surveyors can indicate a disagreement over the true location.

Maps of individual land parcels may be constructed by surveyors or engineers, and may show a nearby section corner or line; these maps may be officially “recorded” at the county courthouse, thereby becoming a matter of public information. As part of the land subdivision process, plat maps are produced. Ties to the PLSS are required.

As PLSS corners are remonumented, maps called tie sheets are made that show the immediate vicinity of each corner and nearby visible objects.

Shortly after the original PLSS field work was completed, the surveyors’ notes were used to produce the first plat maps-essentially layouts of the PLSS with a few additional geographic features shown. These historical documents have been scanned and are available.

If you are having trouble locating PLSS maps in Wisconsin or need further help, please contact us via e-Mail or at (608) 262-3065.