Surveying relies on physical reference objects placed in the ground. While temporary stakes are what the public may see most often in conjunction with construction work, the enduring reference marks (usually called monuments) are much less prominent. Monuments serve to mark points used for geodetic control networks as well as points used to reference property boundaries. Monuments can take a variety of forms.

The location of a monument may be recorded directly on a map, and nearby objects may also be documented to aid in finding (“recovering”) a monument at a later date. A map showing a monument with distances and directions to surrounding objects is called a “tie sheet”. Photographs may be used to further assist in recovering a monument, and mapping coordinates (even if of low accuracy) may be provided so that a GPS receiver can be used to navigate to the vicinity.

A monument may be labeled with the name of the organization that set it and other useful identifying information. A more visible nearby post (“witness post”) may also be labeled.

A surveyor may or may not have flexibility in where to place a monument. For a property corner (including the PLSS), there is usually only one choice. For geodetic control, on the other hand, the location is chosen to meet practical concerns about line of sight, spacing between nearby monuments, and/or ease of access.

The value of control information or boundary marking is jeopardized by any disturbance to a monument, so protection is key. Disturbing a federalsurvey marker is a misdemeanor and carries a $250 fine for deliberate tampering. Missing or disturbed geodetic control markers, as well as those in danger of being disturbed, should be reported to the agency stamped on the cap or by filling out an online station condition report form. The county surveyor or land information office is the best place to begin when reporting a problem with a PLSS monument. 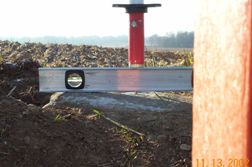 Note: uninformed attempts to restore a disturbed monument can be extremely counterproductive. If a geodetic control monument is disturbed, yet evidence of that disturbance is concealed, users of the monument will not know that its published position and/or elevation are no longer correct. Similarly, a property boundary monument that has been moved will provide a false impression of correct location.

By state statute, the county is custodian of PLSS corners. A common activity by counties is the marking of corners with sturdy, modern monuments, a process called remonumentation. In a number of counties, this work has been completed. 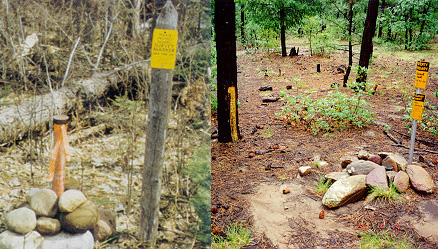 In determining the correct location of a PLSS corner, a land surveyor considers a variety of records and field evidence. The goal is to identify an unambiguous location and then install a labeled monument in the ground at the spot. Often a highly visible witness post is also installed nearby and further documented by a distance and direction from the PLSS corner. The surveyor may also prepare a “tie sheet”, a map of the area surrounding the corner showing distances and directions to nearby objects. The tie sheet helps others find the corner and documents the corner’s location in case it is disturbed or destroyed.

The corner monument and/or witness post typically will be labeled with the town, range, and specific corner’s identity. Where a corner is surrounded by pavement, it may be marked with a metal cap flush with or below the surface.

See this video of land surveying and what a monument looks like in Vernon County, Wisconsin:

In the absence of an officially sanctioned monument, a land surveyor may set a stake in the ground at a point to be used as the PLSS corner. In some cases, more than one such stake may be left in the presumed location of the corner, leading to confusion.

During the 1930’s, Civilian Conservation Corps crews did some remonumentation in forested areas; the documentation of their work, and its quality, is not clear.

Sometimes PLSS corner monuments simultaneously serve as points in a geodetic control network. A good example of this approach is the counties served by the Southeastern Wisconsin Regional Planning Commission, where both horizontal and vertical control values are routinely acquired for PLSS corner monuments.

The State of Wisconsin established a statutory mandate in 1970 calling for counties to complete remonumentation within 20 years, but provided no funds for this work. The progress toward complete remonumentation has varied greatly across the state. To determine the status of a specific section corner monument, it may be necessary to contact the county (County Surveyor if such a position exists or the Land Information Office).

Where reservoirs were filled with water after the original PLSS corners were set, some corners became submerged. Nevertheless, at least some of these are indicated on maps. Along the shorelines of some large lakes (e.g, the Great Lakes) and in some flood plains, there have been some PLSS corners lost to major erosion as the forces of nature modify the landscape.

Many PLSS corners are today in roadways, since it was more practical to acquire public right of way for local road construction along property boundary lines. Some of these corners are covered by pavement or may be flush with the surface.

While the PLSS was developed to mark and convey property, it has also been used in a more general sense to describe land and events on the land. For instance, a large volume of records has been collected over the years where the geographic reference is of the type “SE 1/4 of Section 9, T4N R7E.” Examples are rare plants, wildlife, and wells drilled. The location might be further refined to “NW 1/4 of the NE 1/4 of the SE 1/4” which reduces the area to approximately 10 acres. Note that the phenomenon observed may best be characterized by a point rather than an area, yet the geographic reference is to an area.

Sometimes information that carries a very precise location will be deliberately modified when provided to some users. For instance, a rare plant may have been found growing and its position recorded by GPS to an accuracy of a few meters. Nevertheless, when knowledge of the plant’s existence is provided to some users, it may be reported only to PLSS section. This deliberate vagueness provides protection against disturbance of the plant.

Occasionally a pseudo-PLSS “grid” will be extended over water or non-PLSS lands to provide a reference system for field data collection and resource management. One example is the project to harvest highly valuable logs lost from timber barges in the late 19th century in Chequamegon Bay in Lake Superior.