The first is a statewide 18″ imagery dataset acquired during the spring of 2010. The statewide product was assembled by the WROC contracting team (Ayres Associates and Aero-Metric) by resampling high-resolution, high-accuracy imagery acquired over WROC member counties, along with additional 18-inch lower-accuracy imagery acquired over counties that did not participate in WROC. 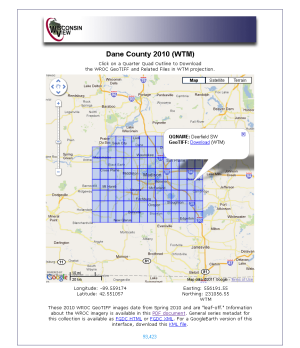 The specifications for the 18″ dataset include:

In addition, 4-band GeoTIFF images from the 2010 National Agriculture Imagery Program (NAIP) flights are also now available from WisconsinView.  While the MrSID county mosaics for the 2010 NAIP flights have been available from WisconsinView for some time, the GeoTIFFs are unique in that they contain a fourth near-infrared band. The fourth band is particularly useful for monitoring vegetation health, wetlands mapping, and water feature delineation.

With this recent addition, the 2010 NAIP imagery is now available from WisconsinView in a variety of formats:

Check out a preview of the 2010 NAIP imagery in an experimental Google Maps interface:

Many thanks are due to WisconsinView Director Dr. Sam Batzli for his hard work in making these important datasets available to the user community!