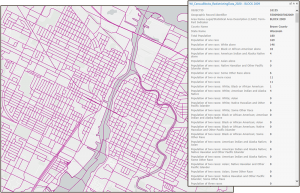 The statewide layer contains 2020 redistricting data as reported by the U.S. Census Bureau for Wisconsin. The attributes come from the 2020 Public Law 94-171 (P.L. 94-171) tables. Esri downloaded the data from the census FTP site, imported it into SAS format and joined to the 2020 TIGER boundaries. All census tables were merged to create a single table containing all attributes. Esri published the layer online (for the entire country) here as a map service. The service was downloaded county by county and appended to create the statewide layer. With Esri’s assistance, the layer has been made available in geodatabase format for download from Geodata@Wisconsin.

There are over 200,000 polygons in the layer, each representing a block.  Blocks are the smallest unit of geography published by the Census Bureau.

This data is intended for reference and mapping purposes, and may be used for basic applications such as viewing, querying and map output production, or to provide a basemap to support graphical overlays and analysis with other spatial data.

Additional information about the layer can be viewed in the metadata attached to the layer. The metadata includes a description of several fields dropped, renamed or added by Esri.

Note that to protect the privacy and confidentiality of respondents, the Census Bureau uses differential privacy techniques. This means that some individual blocks will have values that are inconsistent or improbable. However, when aggregated up, these issues become minimized.