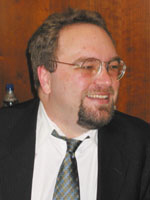 Miszewski, appointed by Governor Doyle in March 2003, heads up the Department of Administration (DOA) Division of Enterprise Technology (DET). Matt was handed the reigns of this large organization during some of the most trying times in state government. Budget woes were only the start. He barely had a chance to find his office before he was tasked with transitioning the former Department of Electronic Government into a new organizational structure within DOA. Many other challenges have been thrown his way since, so to say he is a busy guy is an understatement.

Much of Matt’s WLIA presentation focused on what he calls the “extended enterprise” approach to Information Technology (IT) management, which makes local units of government (county, city, municipal, school boards, law enforcement) and higher education (the University of Wisconsin system and the Technical College Board) direct partners with the state in major IT projects. By developing an environment that he refers to as “borderless government,” new opportunities for improving service to citizens will emerge.

What is WLIS?
WLIS is envisioned as a statewide, web-based, distributed system of Wisconsin land-related data and information. If implemented, it would become a technical and organizational mechanism for accessing and transferring land information, supporting integrated and aggregated views of state and locally produced data, and capitalizing on data already created by local, state, and federal agencies. The WLIS concept is fully described in a Land Council Technical Working Group report in 1999, and more extensively in the WLIS Project Team report in 2000 (appendices).

DNR WLIS Pilot Project
In 2002, the Wisconsin DOA asked the Dept. of Natural Resources (DNR) to help develop select technological pieces of WLIS. The pilot was designed only to scratch the surface of a potential full-scale implementation, and did not attempt to address political, organizational, and funding issues. For more information on the DNR WLIS pilot project, including a large collection of WLIS-related documents, visit wlis.dnr.state.wi.us.

As part of the extended enterprise mission, Miszewski is seeking new ways to establish better collaboration between state and local government. One such example is the Wisconsin Enterprise Architecture Team (WEAT), composed of seven technical experts representing the diverse needs of state agencies (both large and small), local units of government, and the University of Wisconsin. The WEAT group oversees the Wisconsin Enterprise Architecture (EA), a framework for developing technology solutions that meet business needs of the state in the most cost-effective and efficient means possible.

GIO in the Works
Two announcements made during his presentation are of particular importance to land information professionals in Wisconsin.

First, he confirmed that action is being taken to hire a Geographic Information Officer at the state level. The GIO concept was originally proposed in the September 2004 Joint Land Information Board and Land Council Report to the Governor and Legislature. While he didn’t offer a specific timeline, he did state that “I’m happy to able to say today that I have started the process of appointing the first ever statewide GIO.” He went on to add, “I think it’s great for the local folks to have one person to go to who was hired not as a technician, but as a person who can manage the complexities of geospatial activities in the state of Wisconsin, which is no small task.”

Although the specific responsibilities and scope of the position have not yet been announced, Miszewski did offer that the position will report directly to him.

WLIS to become a reality in ‘06
In other news, Miszewski also announced that the WLIS pilot project run by the DNR in 2003-2004 is undergoing an evaluation by the Wisconsin Enterprise Architecture Team. As Matt described it, “The vision [for WLIS] remains an essential one for consumers and business looking to expand, for economic development, and for sound environmental management; for all of these important constituencies, we must answer the call to have a statewide land information system. I’m here to tell you today that we absolutely will, and that the timeline won’t be the 2-3 years that we’ve been working on so far.” He later commented that “you will see a functioning WLIS up and running by the end of the fiscal year [June 30, 2006].”

What remains to be seen is exactly what sort of system DOA can develop on an aggressive timeline over the next 18 months, and what opportunities there will be for local government folks to be involved in the planning and implementation during this time frame. The WLIS Project Team [see sidebar] suggested in 2000 that WLIS would be implemented incrementally over a period of 3-10 (or more) years.

Although technology has advanced significantly in the five years since the Project Team report, unfortunately all of the same political and organizational barriers that existed then are still with us today. Despite the challenges, work on WLIS has to start somewhere. Throughout his presentation, Matt reiterated his hope that state and local governments can put past disagreements aside, and work better together in a time where “doing more with less” is the expectation.

We look forward to learning more about DOA’s plans, and I encourage you to keep your eyes open for information as it develops. [Editors Note: we received word that the WEAT group met to discuss WLIS during the week of March 14, so it appears the proverbial ball is rolling. Stay tuned!]

In light of the challenging budget situation, it’s encouraging to learn that issues near and dear to our community are being discussed at high levels of state government. WLIA has worked hard over the past year to build a stronger relationship with DOA, and it appears progress is being made. With the Wisconsin Land Information Board and Wisconsin Land Council likely both disappearing later this year, a GIO being appointed, and the implementation of a functioning WLIS not far behind, the next 18 months should prove to be very interesting to say the least!