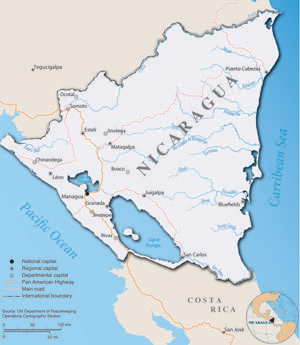 ¡Hola!, mi nombre es Chris Diller, y soy el gerente de sistema de información geográfico para el Departamento de Asuntos Militares de Wisconsin. No I don’t really speak Spanish, but I recently had a terrific opportunity to travel to the country of Nicaragua. In March 2005 I traveled with six other colleagues to share our experiences in emergency management with the government of Nicaragua.

The trip was sponsored by the Wisconsin National Guard as part of the State Partnership Program between the Republic of Nicaragua and the Wisconsin National Guard. This program fosters relations between Wisconsin and the government of Nicaragua. There are multiple programs sponsored each year. They range from marksmanship exchanges, which teach the finer points of shooting, to senior leadership visits, which build diplomatic relationships. The trip I participated in focused on emergency management and preparedness.

Members of the trip included personnel from Wisconsin Emergency Management (WEM), the US Coast Guard (Milwaukee), and Wisconsin National Guard Joint Forces. Part of this exchange was discussing Wisconsin’s effort in emergency management as it relates to GIS with Nicaraguan counterparts.

Nicaraguans know disasters all too well
Nicaragua, geographically speaking, is at the center of a natural hazard “sweet spot” and sits along the so called “Ring of Fire”. An earthquake in 1972 practically flattened the city of Managua. Seven active volcanoes, some of which smolder today, always remind the locals of the dangers of an eruption. A Tsunami killed 177 people in 1992 and hurricane Mitch killed 11,000 Nicaraguans in 1998, making that the worst disaster ever for Nicaragua. To make matters worse they also have floods, landslides, droughts and almost daily forest fires during the dry season. They also have the added responsibility of protecting their valued fishing and forest reserves, all in a country similar to Wisconsin in land area and population. 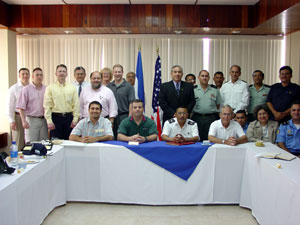 During the week we met with officials from different branches of the Nicaraguan government including the armed forces, the National volunteer fire department, the Ministry of Environment and Natural Resources (MARENA), the Ministry of Agriculture and Forestry (MAGFOR), and the Nicaraguan Institute of Territorial Studies (INETER). One of the biggest highlights was when we briefly met with the Minister of Defense, the equivalent to the US Secretary of Defense.

Nicaragua is split up into departments and regions and the Nicaraguan government is utilizing these regions in a decentralization project to better serve the locals. The idea is that it is much easier to communicate with locals from regional nodes and vice versa. These nodes don’t have GIS capabilities yet, but they hope to add it in a phase two project funded by the World Bank. Nicaragua’s information technology infrastructure is poor, and it is virtually impossible to pass data from Managua out to the locals. This was evident in my troubled ability to communicate by e-mail back to Wisconsin. The hotel we were staying at had a wireless connection, but data transfer rates only equaled 56K dialup.

GIS used in emergency management
Surprisingly enough Nicaragua has successfully incorporated GIS into all phases of emergency management, from planning to response and recovery. Probably the most surprising was their ability to utilize free services that NASA and the USGS provide through their MODIS satellite for monitoring fire conditions, but also their vast network of weather monitoring stations. As you might imagine Nicaragua is a very warm tropical place with daily highs reaching in the mid to upper nineties and humid too. It was a bit of a shock going from twenty degrees in Madison to hot and humid.

They have incorporated GIS in the workflow for responding to fires at the Ministry of Environment and Natural Resources or MARENA (similar to our Department of Natural Resources here), which is part of the National System for Disaster Prevention, Mitigation, and Response or SINAPRED. SINAPRED is the equivalent to our Federal Emergency Management Agency.

This GIS activity is triggered early in the process because it provides an important visual tool that couldn’t be gathered any other way in such a short period of time. Fires are either spotted using satellite photos or reported from the ground. From the time a fire is reported on the ground, satellite images are made available within 24 hours. With the addition of weather monitoring stations they can use historical data to determine drought conditions, and by using overlays of soil, vegetation types, and a Digital Elevation Model (DEM) to determine forest fuel loads they can then deploy resources to fight the fire. All this is accomplished with less than four GIS staff members.

We also met with the Ministry of Agriculture and Forestry or MAGFOR which is responsible for a number of things including food security. Information on the food supply is stored in a database and every five years a census is taken on the entire herd. While there is no “Smart Growth” planning they do have some something resembling zoning, but this is rarely enforced.

As I said before, Nicaraguans depend on accurate weather observations to track drought conditions and have 590 total weather stations throughout the country. All of them are located using GPS and recorded in a database. Some of the stations are high-tech and can record and store data up to two weeks, but most are just simple rain gauges that have to be checked and recorded every week.

The last place we visited was the Nicaraguan Institute of Territorial Studies or INETER. INETER is their version of the USGS and I was really impressed. They have a fairly large lab and have mapped soils, bedrock and all the fault lines. In addition they have mapped much of the critical infrastructure such as bridges and markets.

All of the Nicaraguan government offices we visited are certainly efficient with the limited resources they have, but they have many needs. Unlike Wisconsin where our strengths include data development and the modernization of land records, their local units of government do not have any capacity to support GIS. It doesn’t help that the civil war in the 1980’s devastated the economy and left them in “catch-up” mode compared to other Central American countries. They are the third poorest country in the Western hemisphere and this was certainly apparent to me as I traveled throughout the city of Managua. Most people live on just a couple of dollars a day.

The next tourism hotspot?
Don’t be fooled, though. Nicaragua, is a beautiful country and I had a chance to do a little siteseeing outside of Managua. Our first opportunity put us at the site of one of the seven active volcanoes. What a sight to see! A very large crater, maybe 500 feet down with smoldering sulfur rising as high as you can see. Don’t take too big of a whiff like I did.

After spending time at the Masaya market we spent an evening in the oldest city in Central America, Granada. While the eastern coast of Nicaragua was colonized by the English in the 1700s, it was Granada that was founded first in 1524 by Hernandez de Cordoba of Spain and quickly became a symbol of Spanish wealth. 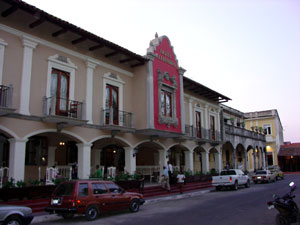 The architectural style in Granada is similar to what you see New Orleans.

Granada is in a sort of modern revolution. Many of the buildings and pieces of property are being bought up by Westerners and Europeans. They are revitalizing the city which looks very much like the French Quarter in New Orleans. Many other towns are developing in a similar fashion and some are saying that Nicaragua will quickly become an attractive tourist destination, much like neighboring Costa Rica.

Nicaraguans face similar issues
Nicaraguan GIS professionals have many of the same issues we face in Wisconsin everyday. These problems include the need for data sharing agreements, development of data standards, and the lack of associated metadata. As the relationship between Wisconsin and Nicaragua continues to develop, I hope that we can provide them with assistance while at the same time sharing experiences from which we all can learn.

If you would like to learn more about my trip you can contact me at chris.diller@dma.state.wi.us. If you, your local government, or organization are interested in more information about the partnership, assisting in the program, or donating goods or services to Nicaraguan organizations, please feel free to contact Major George Mason at the National Guard headquarters in Madison at (608) 242-3013; george.w.mason@wi.ngb.army.mil.