Most of you reading this already know 2005 was a big year for county-funded orthophotography projects in . I recently learned the , , and were covered by additional orthoimagery that few, if anyone, in knew about.

First, the bottom line. In July of 2005, a vendor acquired 1-foot resolution, color orthophotography covering and , and also a large portion of the Fox Valley. Both areas were flown on speculation, and were not connected to any county-funded projects.

The imagery sat on a shelf until September of 2006 when it was purchased by the U.S. Geological Survey (USGS) in support of the National Geospatial Intelligence Agency (NGA). NGA has on ongoing program called the “133 Cities” Urban Areas program which acquires imagery over major metropolitan areas on a regular basis to support homeland security applications. The Fox Valley and Racine/Kenosha regions fall into what they call “third tier” areas, which are flown only after higher priority locations are covered, and if funding is available.

Check it out online

The imagery purchased by USGS is available for viewing in the National Map, and Microsoft’s Local Live Web applications. Because the imagery is from a commercial source with some distribution restrictions in place, access is currently limited to “view-only.” However, these restrictions will soon disappear when the imagery becomes public domain on September 21, 2007. After that date, it will be available from the USGS Seamless Data Download Service, and perhaps a Wisconsin-based source to be determined.

In addition to the local projects, the U.S. Department of Agriculture acquired statewide one-meter color orthophotography through their National Agriculture Imagery Program (NAIP) in the summer of 2005.

Those are the facts, now here is some bonus commentary. 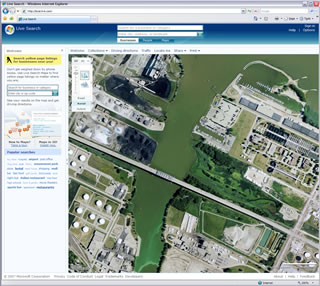 On the surface, the purchase by USGS seems like a duplication of effort, given that similar imagery was acquired for the same year (albeit a different season) by the counties. In this case, USGS did not have the funding back in 2004 and early 2005 when the county projects were forming. Simply put, the USGS dollars didn’t materialize until 2006, long after counties paid the bill for their own projects.

This then begs the question, why didn’t USGS purchase existing imagery from the counties? In the end, USGS made the basic business decision to purchase from a vendor that could provide a consistent color product across the regions (with summer “leaf on” conditions), rather than a patchwork of color and black and white products with varying resolutions from counties flown during the spring. So, it came down to a matter of the specifications needed to support the 133 Cities program, not some sort of “scandalous” oversight on the part of the feds.

The situation described above is a good example of the need for a coordinated and sustainable imagery program such as the one proposed by the National States Geographic Information Council (NSGIC). If implemented, Imagery for the Nation (IFTN) will fund a base of consistent nationwide products, thus (in theory) reducing potential duplication of effort by attempting to meet a wide range of needs.

If such a national program materializes, or if can develop its own statewide program, I have to believe we will see tighter, more sustainable partnerships develop in the future.