Frank Scarpace, Professor Emeritus from UW-Madison, and Barney Schur from Aerometric of Sheboygan, were among the winners of the 2008 American Society for Photogrammetry and Remote Sensing Fellow Award. The ASPRS designation of Fellow is conferred on active Society members who have performed exceptional service in advancing the science and use of the mapping sciences 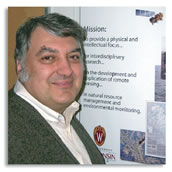 Scarpace has been teaching and conducting research in the fields of remote sensing, image processing, and digital photogrammetry since 1972. He taught all of the advanced courses in remote sensing, image processing, algorithm development, and digital photogrammetry within the mapping science field at the University of Wisconsin-Madison as well as workshops for ASPRS. He has been an ASPRS member since 1991.

With more than 130 published articles and papers, Scarpace is also the author of numerous software programs involving image processing and digital photogrammetry. A number of his current research grants involve using softcopy photogrammetry to produce digital orthophotographs and high resolution (6 inch) DEMs, developing digital photogrammetric techniques to measure shoreline erosion, and applying digital photogrammetry to problems of concern within industrial applications. The National Digital Orthomapping Program is a result of his research work. Other current research includes use of neural networks and fuzzy logic for image classification, the use of wavelet transforms for image compression, developing methods of geometrically correcting multispectral scanners, and improved multilevel matching for softcopy photogrammetric applications.

Bernard “Barney” Schur has been with AERO-METRIC, INC. since its inception in 1969. He is the Chief Executive Officer of the AERO-METRIC companies which include AeroMap, Anchorage, Alaska, Walker and Associates, Seattle, Washington; Aero-Metric, Fort Collins, Colorado; Mark Hurd, Minneapolis, Minnesota; and, Air Survey, Dulles, Virginia. His experience includes the organization and management of major domestic and foreign survey and mapping projects. His business association includes governmental contracting agencies, utility companies and the private engineering community.

Schur has more than 40 years of photogrammetric experience in private industry. He began his career in photogrammetry in 1959 at Chicago Aerial Survey (CAS) as a field surveyor and then as a cartographic draftsman. He served in the U.S. Army from 1963 – 65 after which, he returned to his position at Chicago Aerial Survey and took on the responsibility for managing the cartographic drafting department. Near the end of 1969, Aero-Metric Inc. was incorporated and Schur became one of the original start-up employees of a new company. Within a few years, he became a principal in the company and also the marketing manager. He was elevated to corporate president and director in 1998.

He has served ASPRS as sub-committee chair of the photogrammetry review panel of the Evaluation for Certification Committee, for which he received ASPRS Merit Awards in 1994 and 1998. In 1995, he received the ASPRS Meritorious Service Award and in 2003 the Outstanding Service Award. He is the Past President, Vice President and Director of the former Wisconsin Chapter ASPRS. He also served as a Director for the Management Association Private Photogrammetric Surveyors (MAPPS). He served briefly on the Board of Trustees for the ASPRS Foundation, and is a Certified Photogrammetrist and a Registered Land Surveyor (Photogrammetry) in North and South Carolina.