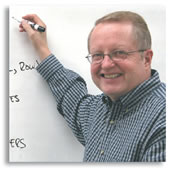 A belated congratulations is due to UW-Madison Professor Emeritus Tom Lillesand for being named as the next Honorary Member of the American Society for Photogrammetry & Remote Sensing (ASPRS). This is the highest award an ASPRS member can receive, and there are only 25 living Honorary Members of the Society at any given time.

Initiated in 1937, this lifetime award is given in recognition of individuals who have rendered distinguished service to ASPRS and/or who have attained distinction in advancing the science and use of the geospatial information sciences. It is awarded for professional excellence and for at least 20 years of service to ASPRS.

A complete biography, and details of Tom’s nomination can be found in the December 2008 ASPRS press release. Tom is a Wisconsin native, and received all three of his degrees (BS, MS, PhD) from UW-Madison.