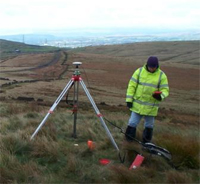 For details on the event, and additional information on the Land Surveying profession, visit the WSLS Web site.

Members from WSLS with others from around the state will set up their GPS receivers and simultaneously obtain GPS signals from the satellite constellation, and then process that extensive data set into a single precise latitude and longitude coordinate for each point measured. Every point will be determined to an accuracy of about 1 centimeter (¼ of an inch) on the surface of the Earth.

WSLS will preserve the coordinates for those locations, and during future National Surveyor’s Weeks, will re-measure these same monuments in order to determine any shift in where Wisconsin is located on the face of the Earth.

WSLS has applied to the Guinness Book of World Records for the distinction of “The Largest Single Day Land Survey.” They will collect two sets of data, first from 10 a.m. until 12 p.m. CDT, and again from 1:00 p.m. until 3:00 p.m. CDT.