Geodetic positions provided by the National Geodetic Survey (NGS), known as the National Spatial Reference System (NSRS), enable users of geospatial information to accurately conform to nearly all other geospatial information that is available. When things change in the NSRS, it is a concern to users. Even though the latest datum adjustment is very small, it is still important to understand these changes.

At about the same time the NAD 83 (NSRS 2007) horizontal readjustment was completed, NGS started a 5-year project known as the Multi-Year CORS Solution (MYCS). NGS is charged with the task of providing geodetic control that meets the needs of their most meticulous users. The MYCS project was undertaken to make the NGS CORS network consistent with international standards.  NGS performed a re-analysis of all CORS data from as far back as 1994.  This project was completed and new CORS positions were completed in September 2011.

Surprisingly, geodetic control users from across the country requested that NGS do a new adjustment of all GPS projects that exist in the NGS database, constrained to the new MYCS values.  NGS agreed to do this and in May 2012, the project to align the passive network with the MYCS positions was completed.  This adjustment was released to the public on June 27, 2012 and will be identified as NAD 83 (2011). A matching geoid model is being developed and is scheduled to be released on June 30th.  It will be named GEOID12. 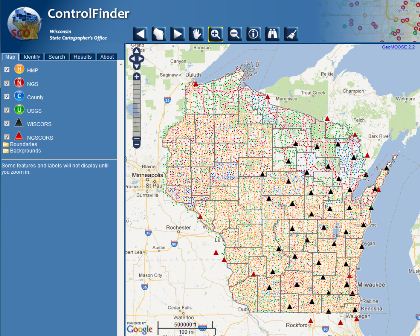 Users can directly access NGS data for Wisconsin through ControlFinder or from NGS’s Web site. ControlFinder provides a central point of access for locating Wisconsin control data displaying control points for federal, state, and various county control with access to related attribute information and metadata. Most appealing is the direct linkage, in many cases, to the custodian’s Web site for their control tie sheets.

The process to develop a new horizontal datum to replace NAD27 began in 1983 and concluded in 1986. That datum is known as the North American Datum of 1983 (NAD 83 (1986)). NAD 83 was implemented in 1986 with a complete readjustment of all available survey data to establish a uniform set of coordinates for all points in the NSRS network based on earth centered ellipsoid. Shortly after NAD 83 (1986) was released, it became apparent that it lacked the precision that was required to support the new technology known as the Global Positioning System (GPS).

The National Geodetic Survey (NGS) realized the potential for increased network accuracy through the use of GPS and undertook an effort to use the technology to establish in each state, a High Precision Geodetic Network (HPGN). Work began in Wisconsin in 1989 and was completed with a readjustment of all survey data available (GPS and classical triangulation projects). This survey and its subsequent adjustments produced a set of coordinates with much improved local accuracies.

The establishment of Wisconsin’s High Accuracy Reference Network (HARN) produced the NAD 83 (1991) datum readjustment. This adjustment has become the most prevalently used dataum by local and state agencies in Wisconsin. Typical shifts when going from NAD 83 (1986) values to NAD 83 (1991) HARN values are up to +/- 1 foot in latitude and/or longitude. 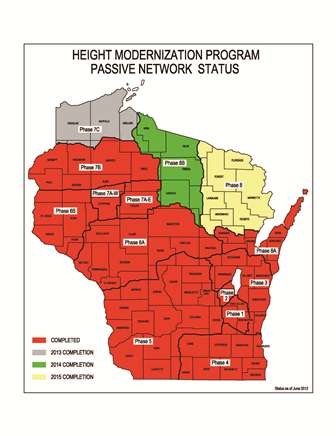 In 1997, the Wisconsin HARN was re-surveyed and adjusted again, with additional survey stations improving and strengthening the network. The 1997 adjustment is identified as (NAD 83 (1997)).

This updated adjustment of Wisconsin GPS observations provided an additional benefit in that it was a foundation for improvements to Wisconsin’s vertical geodetic network through the Height Modernization Program (HMP). Wisconsin’s HMP is designed to improve the density of geodetic control stations listed in the NSRS with precise three-dimensional position values on monuments throughout the state. Wisconsin is divided into phases (geographic regions), based on an area that can be completed as a single campaign (see map for reference and status).

In the 1990’s, NGS began a concerted effort to build a national network of Continuously Operating Reference Stations (CORS).  CORS are stable GPS receivers that are permanently mounted and gather observations 24 hours a day, 7 days a week. The observation data from each CORS is uploaded to NGS servers on a nearly continuous basis. These CORS provide the nation with a very precise nationwide geodetic control network.

It was this CORS network that revealed the discontinuities that existed between many of the state HARN networks that were originally surveyed and adjusted from 1987 through 1996.  Since nearly all GPS projects that were submitted to NGS for bluebooking were tied to the CORS network, in 2005 NGS undertook an effort to do a new National adjustment that would include all of the state HARNs into one project that would be founded on the CORS network.  The nearly 3-year project was completed and published in February 2007, known as NAD 83 (NSRS2007) or more commonly known as NAD 83 (2007).  With the completion of that project, nearly all existing GPS control in the continental United States was now included in one very precise horizontal National adjustment.