The LinkWISCONSIN Address Point and Parcel Mapping Project officially ended on September 30, 2014. The project was a collaboration between the State Cartographer’s Office (SCO) and the Wisconsin Land Information Program (WLIP) at the Wisconsin Department of Administration (DOA). The Public Service Commission of Wisconsin (PSCW) approved the project in 2013 and provided $168,000 in federal grant funding from the National Telecommunications and Information Administration.

The project made use of all known county and municipal parcel and address datasets in the state. In some cases, parcel centroids were substituted for address points when that was the only option. Some locations still exist where neither address point data nor parcel data exist in digital form. These locations remain as small gaps in the statewide layers. The final layers were delivered to the PSCW on June 30, 2014.

The project also updated the PSCW’s Community Anchor Institution (CAI) database. A student-led team at the SCO worked over the summer of 2014 to improve the spatial accuracy of the CAI layer and expand it to include correctional facilities, ports, and private schools. Other CAIs include public schools, libraries, health care providers, public safety entities, higher education institutions, and other community support organizations. 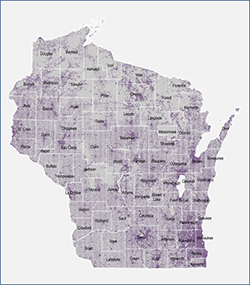 Collaboration across levels of government

As an example of cooperative data sharing between levels of government, the Address Point and Parcel Mapping Project received participation from all 72 counties in Wisconsin, as well as 6 municipalities where gaps existed in county coverage. Only five counties required license agreements, and only one requested a fee. Sixty-four counties submitted data within a month of the initial call for data. The major challenges to the project were technical, including gaps in metadata, variations in data formats and standards, glitches in technical tools, and the massive size of the statewide layers.

The primary objective of the Address Point and Parcel Mapping Project was to create statewide layers from local data. However, the project also had educational objectives, with the goal of building knowledge and capacity to carry out other statewide integration efforts. This educational component helped ensure that the lessons learned from the project could be leveraged to make improvements and gain efficiencies as methods and techniques were shared throughout the community. Specific areas of technical knowledge gained include: data submission infrastructure; methods of data assessment; GIS tools and workflows for standardization; ETL (Extract-Transform-Load) tools; issues and roadblocks; and best practices.

The project also provided opportunities to disseminate knowledge back to the geospatial community and to local data custodians. For example, a free workshop on addressing standards was held at the WLIA conference in February, 2014. The goal of this workshop was to explain the benefits and practicalities of address data standards. Such standards can go a long way toward improving the efficiency of data integration. 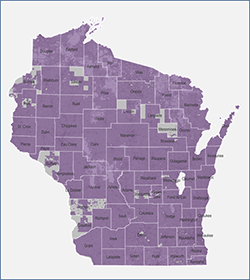 Knowledge was also shared with county contributors through a personalized report providing observations about the data they contributed to the project. The metrics provided in this report are intended to be helpful as counties continue to modernize and maintain digital land records. These reports were distributed at the WLIA conference in October, 2014, or by mail to county LIOs not present at that conference.

There is also a lot to be learned from the final project report itself. I hope you will take some time to read it. It contains something for everyone, including detailed descriptions of the methods used to integrate local data, standardization and parsing logic, final layer schemas, maps and statistics detailing data contributions, challenges and limitations, and final recommendations and best practices.

On behalf of the Address Point and Parcel Mapping Project team, I would like to thank all of you who contributed data for the project. This includes all of Wisconin’s 72 counties and a number of municipalities. Without this data, the project would obviously not have been possible.

I would also like to thank our Advisory Team for the project: Justin Conner, Bill Cozzens, Jeff DuMez, Scott Galetka, Martin Goettl, and Ian Grasshoff.

Finally, thanks go to the Public Service Commission of Wisconsin for providing federal grant funding from the National Telecommunications and Information Administration.

The knowledge gained by the SCO and WLIP on the Address Point and Parcel Mapping Project will be leveraged to benefit the Version 1 Statewide Parcel Map project. For more information on that project, see the SCO website. The Version 1 project will be distributing a call for parcel data later this month.