The USGS US Topo map program has entered its third, three-year cycle of revising and updating the digital US Topo maps. To start this new cycle, the USGS National Geospatial Program is excited to announce the inclusion of U.S. Census Bureau’s Topologically Integrated Geographic Encoding and Referencing (TIGER) roads data for the new US Topo maps, starting with the state of Wisconsin. 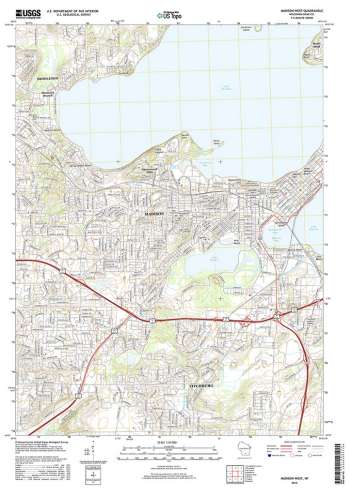 Updated 2015 version of the Madison West US Topo
quadrangle with orthoimage turned off to better
see the improved road network. (click for larger version)

“The addition of TIGER’s roads layer into the US Topo maps is a great example of how data from one agency can benefit another agency,” said Timothy Trainor, Chief, Geography Division, U.S. Census Bureau. “The Census Bureau and the USGS have a long history of collaboration and sharing. This is another win for the American public.”

The TIGER database is provided by the U.S. Census Bureau and was created before the 1990 census to provide over a million unique maps sheets to census enumerators. The TIGER was the basis for the first coast-to-coast digital map to modernize the once-a-decade count. Since 1990, TIGER has evolved into a dynamic mapping system that helped catapult the growth of the geographic information system industry and improve Census Bureau data products.

The TIGER database contains all geographic features — such as roads, railroads, rivers, and legal and statistical geographic boundaries — needed to support the Census Bureau’s data collection and dissemination programs. The TIGER/Line Shapefiles are constantly improving, updated annually, and available for free download.

TIGER’s roads layer includes 6.3 million miles of roads. The original TIGER GIS vector data are available for free download from the TIGER products page. TIGER data are public domain, so using these road data on US Topo removes a previous use restriction from this USGS map product

Additionally, segments of The Ice Age Trail, one of 11 National Scenic Trails, will continue to be featured on select US Topo maps. The USGS partnered with the National Park Service, Wisconsin Department of Natural Resources and Ice Age Trail Alliance to incorporate the Ice Age Trail onto Wisconsin’s maps.

These new US Topo maps replace the second edition US Topo maps and are available for no-cost file download from The National Map, the USGS Map Locator & Downloader website , and several other USGS applications.

To compare change over time, scans of legacy USGS topo maps, some dating back to the late 1800s, can be downloaded from the USGS Historical Topographic Map Collection.

For more information on US Topo maps: http://nationalmap.gov/ustopo/.