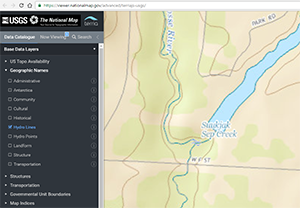 The WGNC is responsible for determining the most appropriate names for geographic features in the state. The Council works with the public, community organizations, and local government bodies to evaluate name change proposals, primarily for natural features such as lakes, rivers, and other physical features. Finally, the Council serves as the state representative of the U.S. Board on Geographic Names to ensure consistency with federal names and names policies.

The WGNC meets annually to discuss geographic name proposals that have been submitted by the public. These proposals are evaluated with reference to Wisconsin and US naming policies, and feedback from local governments is solicited. Proposals that are approved are forwarded to the US BGN where they are voted on. Once approved by the US BGN the new names are entered in to GNIS (Geographic Names Information System), the repository of official US place names.

In 2016 the WGNC reviewed over a dozen geographic name proposals, all of which were for unnamed or previously named hydrologic features in Wisconsin. About half of the proposals were approved by the Council and subsequently by the US BGN.

Of particular note was a proposal from the Ho-Chunk Nation to replace several derogatory feature names in Monroe County with new names: Suukjak Sep Lake and Suukjak Sep Creek. Suukjak Sep means Black Wolf in the Ho-Chunk language, and is the traditional Ho-Chunk name for these features. This proposal was strongly supported by Fort McCoy as a federal military installation. However, the proposed name was not universally supported by all local governments, some of whom cited the difficulty of pronouncing the proposed name.

The proposal was approved by the WGNC, based on US BGN policies aiming to eliminate derogatory names and to promote the official use of geographic names derived from Native American Languages. The name change was approved unanimously by the US BGN at its May, 2016, meeting and was updated in GNIS shortly thereafter. While the previous (derogatory) names can still be found on previously published maps, going forward all official maps produced by the US government, the state of Wisconsin, and its political subdivisions are required to use Suukjak Sep Lake and Suukjak Sep Creek.

The topic of derogatory names is a major concern within the geographic names community. Some states – Oregon, Maine, and South Dakota, for example – have passed legislation to eliminate derogatory names from official maps, but many examples still exist across the country. Likewise the adoption of Native American place names is sometimes met with resistance. One high-profile example is the Alaskan legislature’s decades-long effort to officially change the name of Mount McKinley – the highest peak in North America – back to its traditional name of Denali. This effort was blocked by congressional members from Ohio, the birthplace of President William McKinley, until 2015 when US Secretary of the Interior Sally Jewell acted to make the requested name change official.

Visit the WGNC website for more information on the Council — or to submit a proposal.

To search or download official place names in Wisconsin – or anywhere in the US – visit the GNIS portal.

For more information on the US BGN visit its website, which gives the background and history of the Board.