In 2022 the National Geodetic Survey (NGS) plans to replace NAD 83 and NAVD 88 with new horizontal and vertical reference systems known as the North American Terrestrial Reference Frame of 2022 (NATRF2022) and the North American-Pacific Geopotential Datum of 2022 (NAPGD2022). To this end, NGS will establish a State Plane Coordinate System of 2022 (SPCS2022), which will replace SPCS 83, the version referenced to NAD 83. A Federal Register Notice (FRN) was published on April 12, 2018, announcing that draft SPCS2022 policy and procedures were available for public comment. 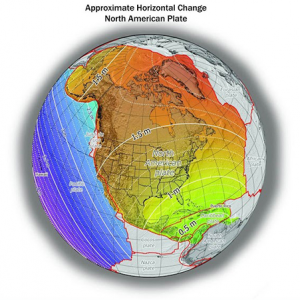 Note that in this context the term SPCS may refer to multiple layers:

In Wisconsin, commentary about the NGS’s draft policy and procedures was submitted by the NATRF2022 Discovery Team in August, 2018. Complete details can be found here.

On March 7, 2019, NGS held a webinar to provide updates to their SPCS plans based on comments received through the FRN process. NGS received 41 unique responses to the FRN, representing one federal agency (US Geological Survey), ten Native American tribes, twenty-three states, and ninety-seven different organizations in total.

As announced during the webinar, the NGS will design a statewide zone for every state, unless there is consensus stakeholder input requesting something different.

NGS will allow a maximum of two multi-zone layers for each state. In many states this will be a “traditional” SPCS, but redesigned for the 2022 reference frames. Some states may choose an LDP system instead of traditional SPCS, but no state will be allowed to have both a traditional SPCS and an LDP system unless one of these two systems covers less than the entire state. States can provide proposals for the design of multi-zone systems as long as these designs conform to NGS specifications.

NGS will accept LDP systems as the multi-zone system for the state, but will not design them. LDP systems will need to be designed by stakeholders. The design will need to conform to NGS specifications in terms of minimum size limits. Specifically, the minimum zone width will be 50 km (31 miles) if the elevation range within the zone is under 250 m. NGS has determined that this zone width will be able to attain distortion levels of < ±50 parts per million. Also, each zone must be unique in terms of its projection parameters with no duplicate zones.

NGS-designed systems will also be designed to minimize distortion at Wisconsin’s topographic surface rather than at the ellipsoid as in the case of the current SPCS.

The WSRS2022 Task Force will be meeting in coming weeks to discuss these implications in more detail and decide on a path forward.