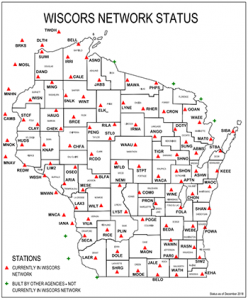 The proposal has been in the works since 2016 when WisDOT reached out to its stakeholders to make them aware of a potential fee being implemented.

The proposal to the Legislature — Clearinghouse Rule CR 19-006 — and related documents can be found online.

The proposal has been submitted pursuant to Wisconsin Statute s. 85.63, which directs the DOT to administer a Surveying Reference Station System consisting of both passive and active components, the latter being defined as a system of “reference stations statewide that continuously transmit global navigation satellite system (GNSS) data to a system server, and the server that receives and processes the data received from the reference stations.” This statute also allows the DOT to charge a fee for providing access to the system, with amounts to be established by rule.

According to the fiscal analysis of the proposed rule, the DOT estimates that the cost to maintain the WISCORS Network annually is approximately $355,000. The proposed fee is intended to provide funding for WISCORS Network operation and to maintain and replace CORS equipment and software. Annual maintenance costs include GNSS receiver replacements and firmware updates ($173,500/year), disruption or destruction of WISCORS infrastructure ($40,000/year), WISCORS server and software upgrades ($59,000/year), replacement of CORS telecommunication equipment ($17,500/year) and repair of CORS equipment ($15,000/year).

The WISCORS Network is accessible 365 days a year, 24 hours a day, with the exception of monthly planned routine maintenance and periodic unplanned and unscheduled system outages. The DOT will monitor the system during regular work hours of 8:00 a.m. to 4:30 p.m. Monday through Friday. The system will not be monitored during state holidays. There are currently over 80 stations in the WISCORS Network.

According to the fiscal estimate for the proposed rule, there are over 3,000 registered users of WISCORS which are categorized as follows: 22% agricultural-related businesses; 12% construction-related businesses; 1% education/research related entities; 53% engineering/surveying businesses; 7% that use the system for GIS mapping; and 5% other.