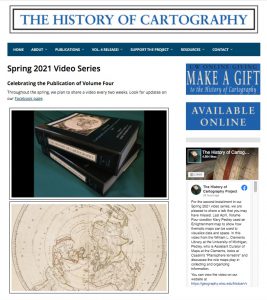 Mary Pedley is Assistant Curator of Maps with the William L. Clements Library at the University of Michigan, Ann Arbor.

The video series opened with an official Volume Four book trailer. A new video will be released every two weeks throughout the spring. Look for original content about Enlightenment cartography, recordings of recent lectures by History of Cartography Project editors, and an archive of presentations you won’t want to miss.