Gertrude Stein’s famous rebuke of Oakland, California – “There’s no there there” – can also be applied to some of the places that appear on maps of our state.

It’s only natural to assume that if a place name appears on a map, there must be something physically on the ground, but this is not always the case. Sometimes maps show communities that existed in the past but have since disappeared. Even if a few homes remain, the businesses that once thrived there – the hotels, gas stations and stores – are no longer in operation. In other cases, maps show places that never existed as actual communities. The names of these places may have been used in the past – for example to describe a geographic landmark like a road intersection – but no settlement ever developed there.

These cartographic phantoms show up on all kinds of maps, from the maps you use for driving directions on your smartphone, to recreational maps and atlases, to official maps made by government agencies. Thanks to a kind of “cartographic inertia” – the tendency for features on one map to be perpetuated to another map – places can continue to appear long after they have disappeared from the physical landscape and even from human memory.

I’d like to take you on a tour of some of these locations in Dane County. I’m focusing on Dane County only because I happen to live there, which makes it easy to visit these locations first-hand. I will also focus on examples from Google Maps because it is so widely used.

The goal of the tour is to draw your attention to the dissonance between what exists physically and what exists cartographically, with specific reference to rural places.

At each stop on the tour I’ll provide the cartographic history of the area using some readily available map resources, including:

The Wisconsin Land Economic Inventory (WLEI) or “Bordner Survey” maps. These are detailed township-level maps created in the late 1930s covering almost the entire state. In addition to land use, crop types and timber stands, the maps show features like schools, mills, taverns, cheese factories and filling stations. Digital scans of these maps are available through the University of Wisconsin-Madison Libraries.

Topographic maps produced by the US Geological Survey (USGS). These maps go back to the late 1800s in some parts of Wisconsin. Map scales range from 1:24,000 to 1:250,000 and span numerous years and editions. These maps have been scanned and georeferenced, and are available online through the TopoView app. The newest USGS topographic maps – called US Topos – are also available on TopoView. US Topos are the first all-digital USGS topographic maps, and for Dane county four editions have been published, in 2010, 2013, 2016 and 2018.

Frederic G. Cassidy’s seminal book, Dane County Place-Names. This book gives a brief history and geographic etymology for thousands of Dane County toponyms (place names) including the names of many rural communities. The book was originally published in 1947 by the American Dialect Society, with University of Wisconsin Press editions in 1968 and 2009. It doesn’t seem that the book was significantly edited between 1947 and 1968 (see Cassidy’s comments in the Preface to the 1968 edition). The 2009 edition is a reprint with no editorial changes to the text.

The Statewide Parcel Map. This map is useful for analyzing the current land use patterns and property classes for about 3.5 million parcels in Wisconsin. The Parcel Map is a collaborative effort of the Wisconsin Land Information Program, the state’s county Land Information Offices, and the State Cartographer’s Office. It is available on the State Cartographer’s Office website.

Bakers Corners appears on Google Maps at the junction of Wilburn Road and County Highway V, about 7 miles north of Sun Prairie, in the Town of Bristol. Its PLSS (Public Land Survey System) location is the intersection of section numbers 3, 4, 9 and 10 in Township 9N, Range 11E.

Today this road junction is surrounded by large parcels of agricultural, forested and undeveloped land, which extend out a mile or more in all directions. According to the Statewide Parcel Map there are no residential, commercial or manufacturing parcels in the area. The closest residential parcels are one-quarter mile away, and these are isolated homes.

A current photograph of this location, facing south along Wilburn Road from a point north of the junction, highlights its rural character. There are no non-farm buildings, services or businesses here today. (Fig. 2)

There is little cartographic evidence that a significant settlement ever existed at this location. Historic plat maps and atlases of Dane County going back to the mid-1800s show no label for Bakers Corners and only a few farm buildings in the area. Later maps show a school on the west side of Wilburn Road south of the junction, but no cluster of homes or businesses. In contrast, North Bristol, about a mile to the west, has a blacksmith shop, cheese factory, saloon, store and post office. (Fig. 3)

Things have not changed much by the 1930s. The WLEI map shows only the school and a few farm buildings at the Bakers Corners location. (Figs. 4 and 5)

Bakers Corners is not labelled on any of the historic USGS topographic maps, starting with the earliest (1955) 1:62,500-scale map and extending through the 1980 1:24,000-scale map. The name makes a surprise appearance on the first two editions of the US Topo maps (2010 and 2013) but disappears from later editions, probably because the mistake was identified and quickly fixed. (Fig. 6) 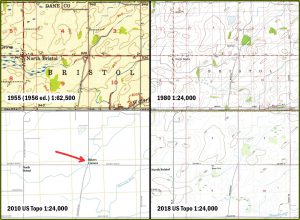 According to Cassidy (p. 9) the name Baker’s Corners – attributed to the Baker family from Massachusetts who owned land in this area – was already out of use in 1947.

Conclusion: There’s no gas or cappuccino for you here, and there probably never was.

Like Bakers Corners, the name Buss’s Corners was not found on any of the historic Dane County maps and atlases from the mid-1800s onward. (Fig. 8)

Cassidy (p. 27) states that Buss’s Corners is a crossroads location named for the Buss family who owned land in the area starting in the late 1800s.

Our tour continues into southeast Dane County, with our first stop at Door Creek. (Fig. 10)

Door Creek is an unusual case. On the Google Map, Door Creek is shown at the intersection of County Highway N and US Highway 12/18, in the Town of Cottage Grove. This is close to the center of section 33 in Township 7N, Range 11E.

Door Creek appears on the USGS 1896 1:62,500-scale map and continues to appear on other USGS maps of various scales throughout the decades that follow, including all US Topo map editions from 2011, 2013, 2016 and 2018. However, the location of Door Creek is always the same: at the present location of the intersection of County Road N and US Highway 12/18 – the same place where Door Creek appears on Google Maps today. (Fig. 14)

So which location is correct? Is it the intersection of County N and US 12/18, where the USGS and Google put it? Or the location a half-mile to the east, where the Door Creek Post Office last existed, and where the old school and cemetery still stand?  Cassidy (p. 46) provides some insight: Door Creek, first known as Buckeye, was moved sometime before 1890 from its location at the center of section 33 to the line between Sections 33 and 34, due to a road realignment. This agrees with the map evidence on the historic Dane County maps. However, for some reason, the USGS maps continue to use the pre-1890 location in the center of section 33 all the way to the present. And this is the location also used by Google.

According to the Statewide Parcel Map, the parcels at this location are mainly classified as agricultural, forested and undeveloped. There is a sizable gravel quarry to the northwest. A photograph of the location, looking east along US 12/18, shows that it is a highway interchange, not a community. (Fig. 15)

If there is a community of Door Creek, it is located a half-mile to the east, at the line between sections 33 and 34, where the post office was located. Today, this is where North Star Road crosses Highway 12/18, close to a small cluster of residential buildings, Buckeye School and Door Creek Cemetery. (Fig. 16)

Conclusion: The Google map follows the USGS example and places Door Creek in an old location. You won’t find any homes or services at the junction of County N and US 12/18, but if you continue a half-mile east you can see what remains of Door Creek and even stroll through the cemetery.

Our next community is Hanerville, located at the junction of Hammond and Hannerville Roads, a few miles southeast of Stoughton in the Town of Dunkirk. (Fig. 10).

Today this road junction is surrounded by large parcels classified as agriculture and forest. There is a single non-farm building (a home) on the northeast corner of the junction, at the site of the old rural school. (Fig. 17)

The Hanerville label continues to appear on maps through the 1930s, including the WLEI map, which shows the school and one non-farm building on each of the other three corners. (Fig. 20)

The USGS maps disagree with Cassidy, who states (in 1947) that the settlement of Hanerville “is gone.” (p. 69)

Conclusion: There’s not much left of Hanerville except the old school — if indeed that is what sits on the northeast corner of the junction today. It doesn’t seem like Hanerville was ever very large, but any services or businesses that did exist have not survived to the present.

This ends Part 1 of the tour. Part 2 will be posted next week!

In Part 2 we will visit some locations in the western half of Dane County, and I will wrap up with some thoughts on the implications for maps and map design.