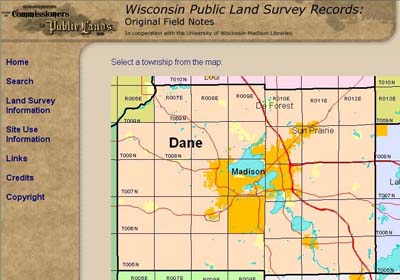 Two large sets of historical land records for Wisconsin have become available on the web recently. The notes made by the original government land surveyors (1832 – 1866) as well as the "Bordner Survey" maps done mostly during the 1930’s have been scanned. Both sets of information can be searched and viewed over the Internet.

PLSS notebooks are on line
The notebooks created by the federal government’s General Land Office (GLO) surveyors document the establishment of the Public Land Survey System (PLSS) in Wisconsin. Progressing roughly from south to north, the survey marked lands held by the federal government so that they could be sold to private citizens. The notebooks hold the first record in the chain of title for almost all real property parcels in our state.

As part of their routine work, the surveyors made general observations about the landscape and identified trees in the immediate vicinity of each marker that they placed in the ground. Typically these markers were spaced one-half mile apart in a quasi-grid pattern although additional ones were installed along the shores of lakes and rivers.

Wisconsin’s Board of Commissioners of Public Lands (BCPL) holds the original survey notebooks. BCPL contracted with the University of Wisconsin-Madison’s General Library System to scan the notebooks and create a web service. Scans and background information on the documents and the survey in general.

Other PLSS-related resources
As the field survey work was completed, plat maps (typically one per township) were drawn by other GLO staff based on the notebook contents. These maps were scanned several years ago and made available on CD-ROM (one/county; each $50) by BCPL, and are scheduled to be added to the survey notes website by approximately mid-2004.

An existing web service provides access to original land patents, the documents that conveyed title from the government to the initial owner. These records are held by the federal Bureau of Land Management. Just link to the web site.

The State of Wisconsin issued similar patents for some lands, and the records reflecting these transactions are also scheduled for scanning and web presentation within a couple of years.

Land Economic Inventory maps also available
The second set of information now accessible over the web are the maps from the Wisconsin Land Economic Inventory (WLEI). This project was led by John Bordner, hence the casual term "Bordner surveys." The WLEI was a Great Depression-era project to evaluate the state’s lands through ground observation supplemented by aerial photography which had just emerged as a practical land inventory tool. Bordner’s project resulted in township maps indicating primarily the land cover and use, with a judgement on economic value assigned to mapped areas.

Almost the entire state was mapped over the 20-year duration of the project which slowed when World War II diverted trained foresters to wartime tasks. The maps have been housed at UW-Madison libraries, and now are scanned for viewing and download. Visit the site at http://steenbock.library.wisc.edu/general/bordner.html.