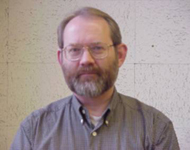 An era ended in the State Cartographer’s Office on April 30 with the retirement of Bob Gurda. Bob, who has held the Assistant State Cartographer title for the past thirteen years, contributed significantly to the public identity and success of the SCO in so many ways.

Perhaps, Bob’s most lasting impact has been as editor of this publication, the Wisconsin Mapping Bulletin, a role he has performed since his arrival at the SCO in early 1988. Over these years the Bulletin has been published consistently, becoming one of the highest quality and most recognizable state mapping newsletters in the country. A large measure of the success of the Bulletin goes to Bob’s “reader- friendly” writing style, his consistent editing skills, and a willingness to produce original reports and interviews on a wide variety of topics.

Bob has been a “Badger” all of his life. He was born and raised in Madison, and his father was a UW-Madison employee for many years. Bob received a Bachelor’s Degree in Zoology in the early 70’s, then pursued a number of diverse career options before returning to the Madison Campus in 1983 to earn a Master’s Degree in Cartography. Following the degree completion, he began his mapping career as a Research Specialist on the CONSOIL Project at the Land Information and Computer Graphics Facility. While there he worked with the likes of Ben Niemann, David Moyer, Nick Chrisman, Steve Ventura, Jerry Sullivan, Jim Clapp, and Al Vonderohe on a variety of technological and institutional advances, such as evaluating the specifications and use of digital orthophotos, and the conceptual components of what was emerging as the WI Land Information Program.

In 1988, Bob moved across campus to Science Hall to join the SCO as the assistant to then State Cartographer Art Ziegler. Soon after Bob’s arrival at the SCO, Art needed to reduce his work load. This unexpectedly thrust Bob into an office leadership role, which he performed admirably.

At this same time the WI Land Information Association (WLIA) was forming, and Bob and the SCO’s Brenda Hemstead became the administrative management team for the association by organizing conferences, maintaining membership lists, and managing the finances. As WLIA Secretary, Bob recorded the decisions of the WLIA Board and committees. As the Association grew in membership and activity, management responsibilities were contracted to others, but Bob significantly contributed to the birth and growth of the organization. In the early 90’s, in recognition of his early work, the WLIA twice honored him with its Distinguished Service Award and Outstanding Contribution Award.

When I arrived at the SCO in 1991, Bob and others were in the final stages of completing a WLIP guidance document, Introduction to Local Land Information Systems for Wisconsin’s Future, a publication distributed and consumed widely across the state for years to follow. It was one of the first documents to explain in detail the components and foundation of a local system. Subsequently, Bob continued to be heavily involved in many activities. For example, he was Chair of the WISCLAND Project Steering Committee, Chair of the State Interagency Data Sharing Workgroup, and has been a long-time member of the Interagency State Soil Survey Group. More recently, Bob has coordinated the UW-Madison campus GIS group SIAC, which has brought a variety of speakers to the campus and provided opportunities for students to present their research work to a broad campus audience.

As Bob now moves on to tackle a variety of personal and family activities, I wish him the best in the future, while at the same time recognize his long and substantial contributions to the SCO and the State of Wisconsin. Thank you, Bob, for your commitment and service. Your imprint on our business will be felt and appreciated for years to come.