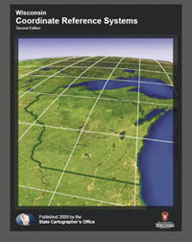 This new 119-page publication contains general background information on map projections and coordinate systems, as well as specific coordinate systems design parameters used in Wisconsin. Most notable of these is the recent Wisconsin Coordinate Reference System (WISCRS), designed and created in 2006 as an alternative system to the existing Wisconsin County Coordinate System (WCCS) that became available in 1995.

WISCRS simplifies some of the design details of the WCCS making WISCRS implementation in computer software programs more straightforward. It is important to note that the largest differences in coordinate values between WCCS and WISCRS are less than five millimeters allowing data in either system to be integrated without concern for significant coordinate discrepancies.

This edition of the handbook also contains expanded and up-to-date information on horizontal datums, a new section on vertical datums, a much more detailed section on coordinate conversion and transformation, and expanded pages of definitions, references, and resources, including Web sites with coordinate and spatial reference system information.