Visit the interactive APFO NAIP status map, or for more information on the NAIP program, check out the Farm Service Agency NAIP page, or the NAIP information sheet.

Wisconsin and 29 other states are being flown this summer as part of the 2010 USDA National Agriculture Imagery Program (NAIP). Nationally, the 2010 NAIP project covers a total of 2,353 counties in 30 states, equating to just over 2 million square miles. The majority of $30 million needed for the 2010 program came from the USDA Farm Service Agency ($23.9 million), while the remainder was contributed by other federal and state partners.

One of the most exciting developments this year will be the availability of a no-cost (to Wisconsin) fourth near-infrared (NIR) band. The NIR band is particularly useful in assessing the health and vigor of actively growing vegetation, delineating water bodies, and as an aid in distinguishing between different land cover types.

Although all of the national NAIP contractors are using IR-capable digital cameras for the 2010 acquisitions, until recently the NIR band was not part of the standard deliverable to the Farm Service Agency (FSA). Previously, FSA was seeking state and local partners willing to cover the additional processing costs. For Wisconsin, this amounted to $96,000.

However, thanks to lower than expected contracting costs, several key state partnerships, and funding from the National Resources Conservation Service (NRCS), FSA was able to make the near-infrared band part of the standard product available to all users. The net effect is that most state and local users will not pay anything for the added NIR band.

It’s important to note, however, this is a one-time-only opportunity. USDA and NRCS may not have the funding in the future to process the near-IR band, even if it is collected by the contractors. When I spoke to several folks from both agencies at the National Digital Orthophoto Programs (NDOP) steering committee meeting in May, they emphasized that state and local partnerships are absolutely critical to the ongoing success of NAIP. 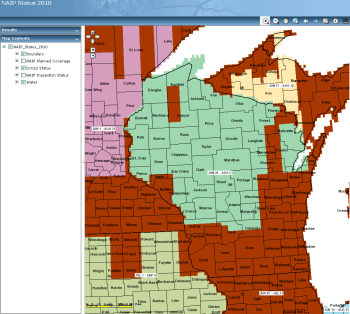 Planes in the air

Photo Science, the contractor selected by USDA to acquire imagery over Wisconsin, has made significant progress since the flying season began in late June. Eyeballing the progress reported on the USDA Aerial Photography Field Office (APFO) interactive status map, it appears that roughly 40% of Wisconsin has been acquired as of late July. Major areas complete include most of southern Wisconsin, extending north into the Fox Valley and Door County. According to the APFO Web site, the Wisconsin flying season will wrap up at the end of August.

Since Wisconsin did not partner financially with FSA this year, the official policy is that all data would need to be purchased through the NRCS Geospatial Data Gateway. However, I know the folks at the NRCS office in Madison are looking into other options for getting the NAIP imagery into Wisconsin for (likely) distribution via the UW-Madison WisconsinView project. I will report more on this later in the summer and fall as we learn more specifics.

In late May I attended a meeting at the USDA-FSA offices in Madison regarding an effort by the APFO to collect photo-identifiable control points. While the NAIP contractors are responsible for all imagery orthorectification, APFO is seeking additional control points from state and local partners for conducting post-flight spatial accuracy assessments. Any data collected from partners will supplement APFO’s growing national database of photo control points.

APFO spells out all the specifics in a requirements document, but the basics parameters for control points are:

Brenda Zachman (608-662-4422 ext.139) from FSA in Madison is coordinating the control point collection effort for Wisconsin. Contact her directly if you are willing to contribute photo-identifiable control to APFO.