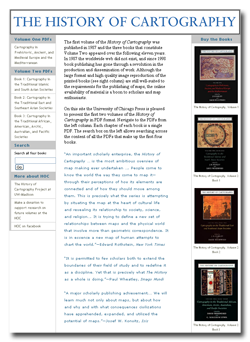 In July 2011, the University of Chicago Press made Volume One and Volume Two (Books 1, 2, and 3) of The History of Cartography freely available online. The Press converted all parts of each previously-published book, including chapters, illustrations, and bibliographies, into PDF files that can be accessed online or downloaded. Each chapter is a separate PDF file, and color plates are grouped together for easy access. Visitors to the site can also use a search tool to find files containing a specified keyword.

The six-volume History of Cartography series is the major work of the History of Cartography Project housed in the Geography Department at the University of Wisconsin-Madison. The series examines maps in the context of the societies that made and used them, and it is designed specifically to advance the understanding of maps as cultural artifacts. It is the only comprehensive work that studies the people, cultures, and societies that have produced and consumed maps from prehistoric times to the present.

The History of Cartography series was founded by J. B. Harley (1932-1991) and David Woodward (1942-2004). It is now directed by Matthew Edney and edited by an international team of scholars.

Volumes One and Two cover cartography in the prehistoric and ancient world, medieval Europe, traditional Asian and Islamic societies, and indigenous societies across the rest of the world. Volume Three covers cartography in the European Renaissance and, while not yet available online, may be purchased in print from the University of Chicago Press.

The final three volumes of the series are being prepared as full-color, interpretive encyclopedias. Short entries present details on technological developments, processes, and ideas, while longer entries interpret broader themes and concepts.

Volume Four (Matthew Edney and Mary Pedley, editors; Dennis Reinhartz and Sarah Tyacke, associate editors) covers cartography in the European Enlightenment. This volume is in the writing stage, with about three-fourths of the entries already submitted and the rest to be completed during 2012.

Volume Five (Roger Kain, editor; Imre Demhardt and Carla Lois, associate editors) covers cartography in the nineteenth century. Planning and design of this volume are underway, with a prospectus to be submitted to the University of Chicago Press in the spring of 2013.

Volume Six (Mark Monmonier, editor; Peter Collier, Karen Cook, Jon Kimerling, and Joel Morrison, associate editors) covers cartography in the twentieth century. This will be the next volume published, with the manuscript going into production at the University of Chicago Press in June 2013.

The History of Cartography Project is funded mainly by grants from the National Endowment for the Humanities and the National Science Foundation. Graduate student assistantships are provided by the University of Wisconsin-Madison’s College of Letters and Science and Graduate School, with funds provided by the Wisconsin Alumni Research Foundation. In addition, the Project depends on support from individuals, foundations, and corporations. More information on funding can be found on the Project’s Web site.

Contact the Project office (email or call 608-263-3992) for additional information about the Project or to be added to the mailing list. You can also stay in touch with Project happenings through its Facebook page and newsletter archive.