After more than two years of work, statewide Wiscland 2 land cover products are now available as a free download from the Wisconsin Department of Natural Resources (DNR).

For many years, DNR relied on an aging land cover database known as “Wiscland” that was developed from Landsat satellite imagery acquired in 1991-1993. The need for an improved statewide land cover database was cited in a 2012 Deer Trustee Report by Dr. James Kroll.

The overarching goal of the Wiscland 2 project was to develop an updated land cover database for the state of Wisconsin using new technologies, datasets, and techniques that have become available since the mid-1990’s.

Four levels of detail available, based on Landsat satellite imagery and other ancillary data

The Wiscland 2 classification has four levels of detail, with each level available as a single GeoTIFF or Esri Grid file. Level 1 contains the most generalized view of the state (“Open Water”,”Forest”, “Wetland”, etc.) while level 4 is the most detailed (“White Pine”, “Lowland Buckthorn/Honeysuckle”, “Black Spruce”, etc.)

The products have a 30-meter spatial resolution, and were derived from satellite imagery acquired from the Landsat 5 Thematic Mapper, Landsat 7 Enhanced Thematic Mapper, and Landsat 8 Operational Land Imager sensors between 2010 and 2014. The spectral data were used in conjunction with topographic, gridded soils, and hydrologic data to develop classification models for each Landsat footprint. 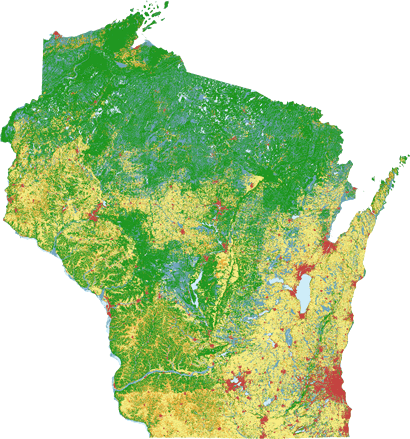 Several standard metrics of accuracy were calculated based on the accuracy assessment, one of which is the overall accuracy (OA). The OA for the Level 1 dataset is 93%. The Level 2 product introduces 11 additional classes. and has an OA of 86%. Overall accuracies for Levels 3 and 4 dropped to 73% and 66%, respectively.

While the level 3 and 4 accuracies may seem low by comparison, this was expected by the UW-Madison Science Team. As the number of classes increases, there is naturally less separation between similar land cover types.  For example, the differences between different spruce classes is subtle, and very difficult to detect with automated classifiers.  Despite lower accuracies at the higher levels, expert reviews revealed the classifications very much mirror expected land cover distributions found across the state.

Many players made the project a success

The Wiscland 2 effort was organized into several teams, each focused on different aspects of the project. The classification and other technical work was coordinated and executed by the SCO.  DNR took the lead on implementing an extensive field campaign conducted in 2015, and provided expert review of the interim products developed by the UW/SCO Science Team.  A DNR Guidance Team served as the leadership committee for the project, and represented the interests of key stakeholders.  In all, nearly 70 different people contributed to Wiscland 2 project.

With an estimated total project cost of $849,000, DNR invested heavily in the statewide land cover mapping effort. DNR received $450,000 from a Federal Aid in Wildlife Restoration grant, with the remainder coming from existing DNR budgets ($364,000) and in-kind support from the State Cartographer’s Office ($35,000).

On behalf of the SCO, we were honored to be involved in the Wiscland 2 project.  I want to personally thank SCO staffers Jo Horton, Carly Mertes, and Matt Bougie for their excellent work during the project.  It was a job well done!

Questions or comments about the Wiscland 2 data may be sent to the DNR Bureau of Technology Services.