Back in May, we first told you about a joint UW/DNR project aimed at updating Wisconsin’s outdated land cover map. We have much to report since our last article!

The University of Wisconsin-Madison and Wisconsin Department of Natural Resources (DNR) are partnering to map the current vegetation, water, and urban patterns of Wisconsin. The resulting digital database will replace a statewide land cover map created by DNR using 1991-1993 data.

One of the main drivers behind the land cover mapping project is DNR’s desire to improve whitetail deer habitat monitoring. The need for an improved statewide land cover database was specifically cited in a 2012 report by Deer Trustee Dr. James Kroll. The final land cover product(s) will be delivered to DNR by June 30, 2016. 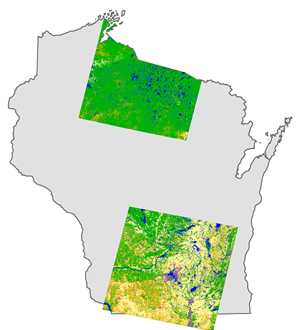 As one of our first tasks, the UW-Madison team worked with DNR to identify two pilot sites in Wisconsin: one in northern Wisconsin, and another in the south. The northern pilot site, centered roughly over Oneida County, includes a wide range of forest classes. In contrast, the southern site contains many more grasslands and agricultural lands. While our original goal was to pick one pilot site, we quickly determined no single location in the state could provide the diversity of land cover classes we needed to fully test our proposed methods and data inputs.

Once the pilot sites were identified, we turned our attention to collecting training and validation data. As the name implies, training data are used to train a computer classifier to recognize each land cover class. In contrast, validation data are used test the accuracy of the classification results. As a general rule, we used 60% of our samples for training, and 40% for validation.

While we fully expect additional fieldwork will be necessary later in the project, we were able to draw upon significant field data already collected by DNR and other agencies. Examples include the DNR Forest “Recon” dataset, DNR Continuous Forest Inventory (CFI), U.S. Forest Service Forest Inventory and Analysis (FIA) data, and nearly a dozen other datasets developed by DNR for grassland monitoring projects. We also utilized training data from the Wiscland 1 project, but we are in the process of reviewing the validity of this data since it was collected in the 1990’s. In all, we had a total of approximately 173,000 individual samples (training and validation) available for the two pilot areas.

Image classification methods have evolved considerably since the first Wiscland land cover product was developed in the 1990’s. For the pilot project, we leaned heavily on two “machine learning” classification systems: Decision Trees and Support Vector Machines. Unlike traditional classifiers that rely on spectral (image) data only, these methods can ingest any type of digital data. In addition to multi-temporal Landsat satellite data, we also input elevation, slope, topographic wetness index, total soil organic carbon, and total soil water holding capacity to the classifiers. Doing so allows us to more accurately profile each land cover class. We continue to evaluate other data sources that will improve the classification accuracies. 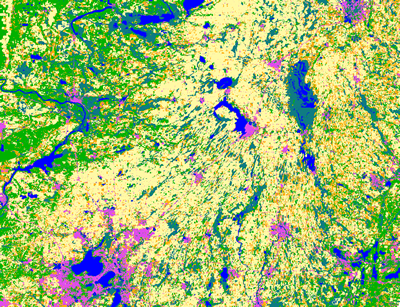 On August 29th, the UW Project Team delivered draft land cover maps to DNR for the two pilot areas. More review is needed before we are able to share the digital data more publicly, but we do want to share the

detailed pilot report2.69 MB. Some quick highlights from the report:

The pilot project is only the beginning of a two-year long process to map Wisconsin’s land cover. We have much to do, and more refinement is needed, but the early results look promising. For the latest project information, be sure to visit the Wisconsin Landcover 2 Project Page.

The Wiscland 2 project is a cooperative effort between UW-Madison and the Wisconsin DNR, with funding from the Federal Aid in Wildlife Restoration Program, grant #W‐160‐P‐25.