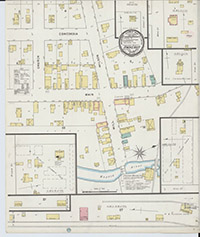 The Library of Congress (LOC) has placed online nearly 25,000 Sanborn Fire Insurance Maps, which depict the structure and use of buildings in U.S. cities and towns. Maps will be added monthly until 2020, for a total of approximately 500,000.

Currently, the Sandborn Maps Collection has 405 digitally scanned maps available for select Wisconsin cities.  The quality of the scanned maps is impressive!

The Sanborn Fire Insurance Maps are a valuable resource for genealogists, historians, urban planners, teachers or anyone with a personal connection to a community, street or building.  The maps depict more than 12,000 American towns and cities.  They show the size, shape and construction materials of dwellings, commercial buildings, factories and other structures.  They indicate both the names and width of streets, and show property boundaries and how individual buildings were used.  House and block numbers are identified.  They also show the location of water mains, fire alarm boxes and fire hydrants.

In the 19th century, specialized maps were originally prepared for the exclusive use of fire insurance companies and underwriters.  Those companies needed accurate, current and detailed information about the properties they were insuring. The Sanborn Map Company was created around 1866 in the United States in response to this need and began publishing and registering maps for copyright. The Library of Congress acquired the maps through copyright deposit, and the collection grew to 700,000 individual sheets. The insurance industry eventually phased out use of the maps and Sanborn stopped producing updates in the late 1970s