It is with sadness to report Hugh Harper from Vernon County passed away on July 10, 2019 at his rural Readstown home, after a long and hard fought battle with liver disease. 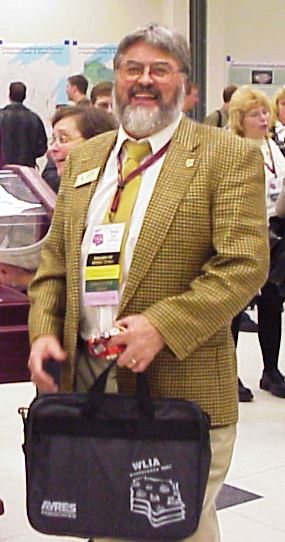 Hugh was a one-of-a-kind type of guy who didn’t hesitate to speak his mind. He had a knack for stirring the pot, sometimes I think he enjoyed doing it to see what reactions he’d get. I remember serving on the Wisconsin Land Information Association’s (WLIA) Board of Directors with Hugh back in the late 90’s and there was never a dull moment.

Here are some thoughts about Hugh from Jeff Hastings, a former Vernon County Land Conservationist:

Here are some excerpts from his obituary…

Hugh was born in Brown’s Valley, near Mindoro.  “Butch” as he was nicknamed by his Dad, was an active farm kid getting up to lots of mischief with his cousins and sisters. He grew up strong enough to survive polio and appendicitis at age 13, although he was left with a permanent and distinctive limp. Hugh graduated Melrose High, and earned an associate degree in drafting, from Wausau Technical Institute.  After working for Wick Homes and Mormon feeds, Hugh desperately wanted to return to farm life. He and and his wife Geri purchased a beautiful hilltop farm near Readstown. “Kickapoo Beans and Greens” sold a variety of produce. Hugh enjoyed being a “gentleman” farmer, raising pigs, goats, chickens and several thousand “head” of red worms for compost, and sharing the farm with several generations of much loved dogs and cats. He was passionate about republican politics, sustainable land use and conservation. He was actively involved with the Wisconsin Land Information Association, the Wisconsin Towns Association, writing block grants for several Wisconsin townships, and assessing for many local townships. “Uncle Butch,” enjoyed the fine art of pottering around the farm, studying the Harper family history, hunting, fishing, a good game of cribbage and cheering for/cursing at the Green Bay Packers.

Hugh will be greatly missed.