As part of the statewide PLSS (Public Land Survey System) database project, the SCO has recently published two documents detailing the implementation of a PLSS corner numbering system for the state. 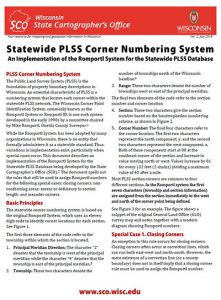 The numbering system for the statewide PLSS network is based on the Wisconsin Corner Point Identification System, commonly known as the Romportl System or Romportl ID, developed in the early 1990s by a committee chaired by Mike Romportl, Oneida County Surveyor. While the Romportl System has been adopted by many organizations in Wisconsin, there is no entity that formally administers it as a statewide standard. Thus, variations in implementation exist, particularly when special cases occur. The first of the two new documents describes the rules that will be used to assign Romportl numbers for the following special cases in the statewide database: closing corners; non-conforming areas; excess or deficiency in section length; and meander corners.

The new publication is an update to an earlier, proposed version of the numbering system published several months ago.

The second publication outlines an extension to the numbering system arising from several special cases known to occur in Wisconsin: fractional townships, such as Township 29N Range 21-½E in Marinette and Oconto counties; and corners in adjacent states to which surveys in Wisconsin are tied, which may be referenced to a meridian other than the Extended 4th Principal Meridian. 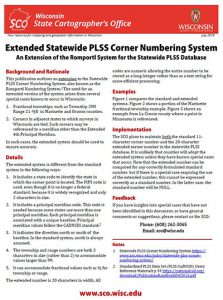 The extended system is 20 characters in length compared to 11 characters for the standard numbering system. The additional characters are used to identify: the state in which the corner point is located; the principal meridian code; the direction north or south of the baseline; and any fractional range or township values. The 20-character code can also accommodate township and range numbers larger than 99.

If you have insights into special cases that have not been identified in these document, or have general comments or suggestions, please email or call us at (608) 262-3065.