Wisconsin’s Statewide Parcel Database is a unique resource showing the distribution of parcel attributes across the state, including property value, real estate taxes, tax exempt status, and the acreage in different property classes. With seven annual editions of the Database now public, it is also possible to analyze changes in these attributes over time. 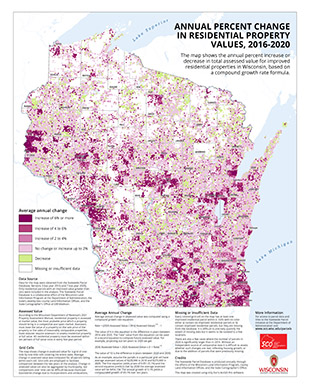 For those readers unfamiliar with the Statewide Parcel Database, more information can be found here, including links to the Statewide Parcel Web App, parcel data download links for all seven editions of the Database, and a link to the Parcel Initiative Home Page at the Wisconsin Department of Administration. The Statewide Parcel Initiative is an effort to create a digital parcel database for Wisconsin by aggregating county parcel datasets utilizing GIS technology. The Initiative is a multi-year collaborative effort of the Wisconsin Land Information Program at the Department of Administration, the State Cartographer’s Office at UW-Madison, and the state’s seventy-two county Land Information Offices. Wisconsin Act 20, the biennial state budget for 2013-2015, created statutory directives for state and local governments to coordinate on the development of the Statewide Database.

To explore the capabilities of the Statewide Parcel Database to map change over time, a map was constructed showing the annual percent change in residential property values from 2016 to 2020. You can click the thumbnail image included in this post to open a poster-sized 300-dpi JPG version of the map (about 7 MB in size).

The map uses a grid of one-mile by one-mile cells covering the state to depict change in assessed value. Grid cells are employed to facilitate comparison between the two years of the analysis. As an alternative to grid cells, data could be aggregated by municipality. However, this can make comparisons over time more difficult because municipal boundaries often change due to incorporations and annexations.

The grid contains 300 columns by 330 rows of cells, giving 99,000 cells in total. The value of each grid cell is the average assessed value of all parcels falling within the cell. This may sound challenging, since computing the grid cell nearest to each parcel would involve almost 200 billion distance calculations (99,000 cells x 1.9 million parcels = 188.1 billion combinations). But this is not necessary. Instead, we can simply use the centroid of each parcel to create integer Easting and Northing coordinates (in miles) and use these coordinates as the row and column indexes of the grid. For each cell, we then sum the assessed value of all parcels having row and column indexes that correspond to that cell. We also keep track of the number of parcels tabulated for each cell so that the average assessed value can be computed.

The Parcel Database uses a Wisconsin Transverse Mercator (WTM) coordinate system with Easting and Northing values in meters. To complete the grid computations, we convert the WTM coordinates from meters to miles, and also subtract values from the Eastings and Northings to ensure that the row and column indexes are in the range 0-299 (for columns) and 0-329 (for rows).

The grid computation looks like this (in C, with some details simplified):

This computation would be applied to each parcel, where easting_meters and northing_meters are the WTM Easting and Northing coordinates of the parcel centroid in meters, and assessed_value is the parcel’s CNTASSDVALUE. MET2MILE is a constant equal to 0.000621371 to convert meters to miles, while MINE and MINN are constants subtracted from the Easting and Northing coordinates (in miles) to produce the desired range of row and column index values (MINE and MINN are 180 and 135 respectively for this map).

The Rate value computed from this equation can be used in a second formula to compute future assessed value. For example, projecting out ten years to 2030 we get:

The map shows that well over one-half of Wisconsin’s counties include at least one significant cluster with an annual increase on the order of 6% or more. There are several regional groupings including: a) Dane and its neighbors to the north and east including Sauk, Columbia, Dodge and Jefferson Counties; b) Milwaukee and neighboring counties including Racine, Waukesha, Washington and Ozaukee; c) counties along the Illinois border including Green, Rock, Walworth and Kenosha; d) the Fox Valley region including Brown, Outagamie, Winnebago and Calumet Counties; e) counties along the Minnesota border, especially La Crosse, Trempealeau, Pierce, St. Croix and Polk; f) Portage County around Stevens Point; g) Marathon county; h) Eau Claire and Chippewa Counties including areas around the cities of Eau Claire and Chippewa Falls; i) counties on the Lake Michigan coast including Sheboygan and Kewaunee; j) Fond du Lac County; k) numerous “northwoods” counties including Barron, Bayfield, Douglas, Dunn, Florence, Langlade, Oconto and Oneida; and l) many predominantly rural counties, including Clark, Dodge, Jackson, Juneau, Monroe and Waushara.

High-growth cells appear in a more dispersed patterns in other counties as well, including the counties in southwest Wisconsin (Crawford, Grant, Iowa, Lafayette, Richland and Vernon) and many counties in the north (Burnett, Rusk, Taylor, Washburn and others).

In short, residential property values are increasing rapidly in many areas of the state, including rural areas isolated from the market forces seen larger cities. This is not just an urban phenomenon. It will be interesting to revisit this map next year and in years to come, to see how these patterns have changed.

This map, including the layout and all text, was created using only Esri’s ArcGIS Pro software.

The Statewide Parcel Database is updated annually by a team at the Department of Administration and the State Cartographer’s Office, using data developed and maintained by the state’s seventy-two counties and many cities and villages. The efforts of these individuals make this unique database possible.

Thanks to Peter Herreid at the Department of Administration and Mark Eppli at the Graaskamp Center for Real Estate at UW-Madison for their helpful comments.