WHAIFinder is an online application designed to facilitate broad access to a rare collection of 1937-1941 aerial photographs covering the state of Wisconsin. The State Cartographer’s Office, the Robinson Map Library and the University of Wisconsin Digital Collections Center recently completed a three-year project to digitize the entire photo collection and make it accessible online. The project was funded by a grant from the Ira and Ineva Reilly Baldwin Wisconsin Idea Endowment at the University of Wisconsin-Madison.

Thanks to a nearly complete set of photo prints donated to the project by the Wisconsin Department of Transportation, the resulting digital archive is 99% complete across the state. The majority of the photos were flown by the US Department of Agriculture (USDA), while a few Wisconsin counties were flown by the US Geological Survey (USGS). These photos were scanned, tagged with metadata, and archived in the Fedora Commons Repository of the UW Digital Collections Center and serve as the official copies slated for long-term preservation.

The WHAIFinder application provides access to the digital photos and serves as the front end to the digital archive. WHAIFinder is built on open source software, providing enhanced flexibility in user-oriented interface design and the integration of Google base maps and functions. The WHAIFinder interface is designed to mimic the paper index maps that accompany the print aerial photo collections. Photo centerpoint locations, which were digitized from scanned versions of the paper index maps, are superimposed over Google base maps and are accompanied by reference layers that include Public Land Survey System (PLSS) townships and sections, county boundaries, and associated text labels.

Using WHAIFinder, users can navigate to an area of interest using an address search, PLSS search, or interactive zoom and pan tools. Available photos are then shown with red symbols indicating approximate centerpoints. When the user clicks on an area of interest, the system generates thumbnail images of all photos in the archive that cover the desired location. Users can download selected photos to their desktop in several formats and resolutions, including 150 and 300 dpi JPEGs and 600 dpi TIFFs.

The WHAIFinder application is intended to serve the needs of Wisconsin’s professional geospatial community as well as the general public. Photos are available online for free and are in the public domain. 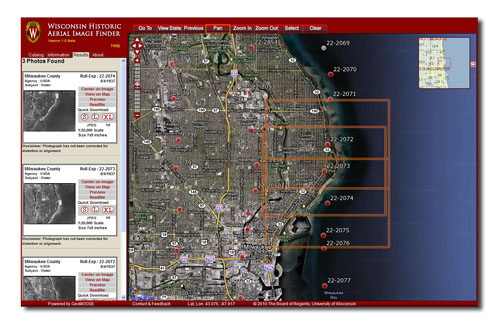