After some initial uncertainty due to the federal budget situation, imagery acquisitions for the  National Agriculture Imagery Program (NAIP) are scheduled to begin in Wisconsin during the third week of June and run through the end of August.

2013 NAIP imagery delivered to the U.S. Department of Agriculture (USDA) Aerial Photography Field Office (APFO) by their contractors will have a 1-meter spatial resolution, and include four spectral bands: RGB and near-infrared.  The fourth near-infrared band, which is useful for assessing the health and vigor of actively growing vegetation, is now a standard NAIP product.

The stated accuracy specification for NAIP imagery is within six meters of photo-identifiable ground control points, but in 2012 the contractors achieved a much better overall accuracy of 3.2 meters at a 95% confidence level. 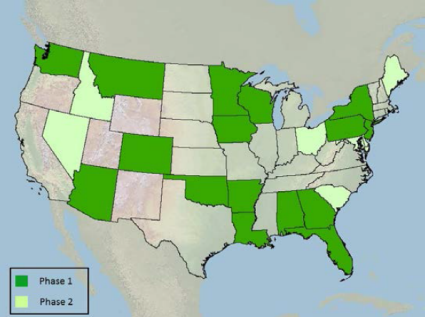 Imagery is delivered to APFO from the contractors within 30 days after the end of the flying season, and then Compressed County Mosaics (CCMs) are made available as a free download from the Natural Resources Conservation Service (NRCS) Geospatial Data Gateway.

In addition, Wisconsin imagery has typically been acquired through the local NRCS state office in Madison, and then handed over to WisconsinView for wider distribution within the state.  Dr. Sam Batzli, Director of WisconsinView, has already expressed interest in once again distributing NAIP imagery to Wisconsin users but no details or specific plans have been worked out at this time.

According to APFO, the 2013 NAIP contract will be awarded in 2 phases. Phase 1 was awarded on May 23rd, for a total of 28,769 quarter quads in 16 States, and was based on available funding of $11,150,024. Phase 2 will be made at a later date in the season when additional funding from federal cost share partners becomes available.

We’ll continue to update you on the 2013 program as more details become available.  In the meantime, be sure to check out the APFO NAIP status viewer and watch the progress of flights over the summer!