The SCO recently received an Outstanding Partner Award from the UW-Stevens Point GIS Center. The award was presented at the Geography/Geology Department annual banquet on May 1st in Stevens Point. 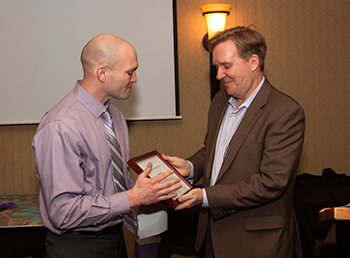 The award was given in recognition of the SCO’s “inspiration, collegiality and dedication to advancing geospatial activities and ideas throughout Wisconsin and beyond its borders.” The office was commended for exemplifying “the significant advancement that can be achieved in working together to solve complex societal problems using geographic information systems.”

The award was presented by Doug Miskowiak, Education Specialist at the UW-Stevens Point GIS Center. Miskowiak highlighted examples of the SCO’s commitment to fostering collaboration and partnerships between educational institutions in Wisconsin. He linked these efforts to the “Wisconsin Idea” and the office’s broad statewide focus. Miskowiak mentioned three projects in particular:

In accepting the award on behalf of the SCO, Howard Veregin, State Cartographer, noted that inter-campus cooperation is a priority for the office. Such cooperation can serve to strengthen programs through the unification of talent and resources, which ultimately serves the interests of students, the UW System, and the state as a whole.