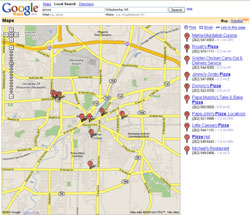 When zoomed in to an area of interest, type in a search term to find points of interest.

Google recently released a new online mapping service that is quickly stealing market share from MapQuest. The new Google Maps site offers a number of improvements over other services.

With MapQuest, you first enter an address so the server can construct a custom map. The resulting map is fairly rudimentary: the color and symbol scheme is simplistic (some would say ugly), navigation is a hassle, and advertisements hawking hotels and high school classmate-finding services distract you from trying to understand just how a person could plot a course through Madison’s isthmus. If you find this process cumbersome and tedious, and the cartographic output to be passable if not downright bewildering, fear not – Google has come to save the day!

With its acquisition of Keyhole Corporation in October 2004, Google added online mapping to its expanding repertoire of tools to fulfill its mission statement, “to organize the world’s information and make it universally accessible and useful.” Keyhole claims to have the largest commercial imagery database online, covering more than eighty major metropolitan areas and thousands of individual cities. The database includes access to world-wide coverage of satellite imagery, high resolution aerial photography in most major U.S. cities, street vectors, business listings, and more. To top it off, data for U.S. cities are updated every two to three years. EarthSat and DigitalGlobe provide the imagery, while NAVTEQ and Tele Atlas provide the vector data for Google Maps.

Navigation is simple
Not only is the eye-pleasing cartography a cut above MapQuest’s flat representations, but navigation is an absolute breeze. The start page at http://maps.google.com/ fills nearly the entire screen with a map of North America. Information about the map is located along the right edge, and the familiar Google search bar is found at the top of the page; you won’t find any wasted space on this website. Since you start with a map, you can opt to take advantage of the search capabilities, or go ahead and explore with the on-screen navigation tools.

You can generate driving directions between two points with Google Maps

Exploring the map is both easy and fun.
Even if you’re not familiar with GIS, getting around is nearly effortless. You have a number of options for navigating: double-clicking to re-center the map at a new location, clicking and dragging to pan, keyboard shortcuts in the form of +, –, PageUp, PageDown, Home, End (zoom in, zoom out, pan north, pan south, pan west, pan east), and on-screen buttons. The on-screen buttons let you readjust the scale, move the map by “jumping” half the screen, and re-centering at the original location. You even have the ability to switch between the map and satellite imagery. Another great feature is the screen is loaded by tiles, which can greatly increase navigation speed by only loading new tiles during each movement.

You might want to start with some examples or a tour, found at the right edge of the page. But if you’re eager to jump right in, you can choose from finding a single location, conducting a local search, or finding directions. The address search works much the same way as any Google search: the more accurate the information you submit, the more accurate your results. When the location(s) are found, the Local Search option really comes in handy. By entering any relevant word, such as “pizza,” you are shown all the places on the screen that offer pizza. Directions are shown as solid bold lines connecting two balloons that pinpoint the start and end locations. If you switch between the map view and the satellite imagery, the directional lines and location pins are still displayed.

New technology driving Google Maps
Despite the numerous improvements over competing online mapping services, the real reason Google Maps is “the next big thing” is the novel technology that lies beneath it, known as AJAX (www.ajaxmatters.com). AJAX (Asynchronous JavaScript and XML) is a web development technique for creating interactive web applications using a combination of HTML and cascading style sheets (for presentation), JavaScript (for dynamic display and interaction), and XML (to asynchronously interchange data with a server). This approach differs from traditional web applications because it drastically reduces the amount of bandwidth required to exchange data between servers and clients, resulting in richer interfaces and faster responses due to reduced server processing time. Google is the first prominent online company to have adopted AJAX, which will undoubtedly surge in popularity with the success of Google Maps.

In summary, Google Maps is the next generation of online mapping. I’m thoroughly impressed; Google Maps is now my #1 destination for online mapping of addresses, businesses, and driving directions. And with the service still in beta testing, you can be assured that it will only improve in the near future. 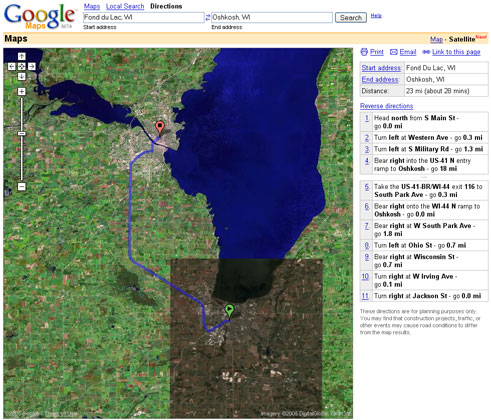 Unlike Mapquest, Google Maps allows you to view satellite imagery and aerial photography in addition to vector-based maps.