Aerial and satellite imagery, in the form of digital orthoimagery, is the foundation for most public and private sector use of GIS. A digital orthoimage is rich in content, and with its inherent scale accuracy, provides an indispensable map base for a wealth of other information.  The value of digital orthos is no secret to the state’s land information community as witnessed by the fact that last year nearly 50 Wisconsin counties and almost 90 municipalities acquired digital ortho imagery.

By no means is Wisconsin unique in its acquisition and use of digital orthos.  Digital orthos have become an essential commodity acquired by hundreds of entities across the nation. In spite of the recognized value of digital orthoimagery and the need to acquire fresh imagery on a regular cycle nationally, we do not have a coherent strategy for imagery acquisition. Over the past decade, this situation has resulted in hundreds of different ortho projects of varying costs and quality, duplication of effort, and a patchwork of coverage.

NSGIC develops an orthoimagery plan
To address these issues from a more comprehensive and national perspective, the National States Geographic Information Council (NSGIC) has put together a broad initiative called Imagery for the Nation. The Imagery for the Nation plan envisions two separate, but well coordinated programs.

The existing National Agricultural Imagery Program (NAIP) administered by the U.S. Department of Agriculture will be enhanced to provide annual 1-meter imagery over all states except Alaska.  This program typically collects imagery during the growing season (leaf-on) in natural color. 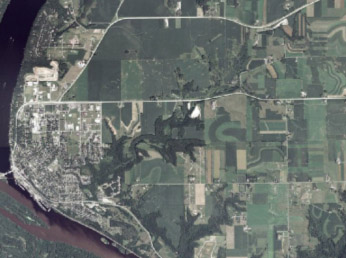 The U.S. Geological Survey (USGS) will administer a second companion plan to NAIP.  Under the proposal, 1-foot resolution imagery will be acquired on a three-year cycle for all states east of the Mississippi River, and for all counties west of the Mississippi River with population densities greater than 25 people per square mile.  In addition, 50% matching funds will be available for partnerships to acquire six-inch Imagery over urban areas identified by the U.S. Census Bureau with populations of at least 50,000, and overall population densities of at least 1,000 people per square mile. This part of the program will acquire imagery in natural color during leaf-off conditions (winter/spring).

Additional details of this proposed program are:

Cost savings can be realized
NSGIC estimates this program will cost approximately $111 million annually, or $333 million for the 3-year cycle.  This estimate includes imagery acquisition and processing costs, contract management, quality control, quality assurance, data distribution, and archiving. NSGIC is estimating that because of its national size and scope, the Imagery for the Nation proposal has the potential to save over $50 million annually if the same imagery were acquired without this coordinated approach.

Officially unveiled by NSGIC last September, the Imagery for the Nation proposal has gained much attention with support coming from several professional societies such as URISA, and private sector mapping companies.

What’s ahead?
The largest hurdle facing the adoption of the Imagery for the Nation plan is the provision for 100% federal funding.  Currently, the Federal Geographic Data Committee (FGDC) is reviewing the proposal, and has appointed a special committee to investigate funding options, one of which is to direct funds to this program from large federal grant programs.  NSGIC and the FGDC have the goal of placing the Imagery for the Nation proposal into the 2008 Federal Budget.  For that to happen, program provisions will have to be placed into 2008 agency budget requests this April.  At its upcoming (March 19-22) Mid-Year conference in Annapolis, MD, NSGIC will be advancing the Imagery for the Nation initiative through contact with Congress and other interested organizations.

Link: Imagery for the Nation brochure