The Wisconsin Land Economic Inventory (WLEI), popularly known as the “Bordner Survey” for its director John Bordner, was a large-scale land resource survey carried out in Wisconsin from the 1920s to the 1940s. Overseen by the Department of Agriculture and the State Planning Board, its purpose was to document the state’s land in order to spur more effective land use planning. To renew interest in this rich piece of Wisconsin history, I recently developed a pilot project aimed at making selected Survey maps available via the popular and ever-evolving geographic viewer, Google Earth. 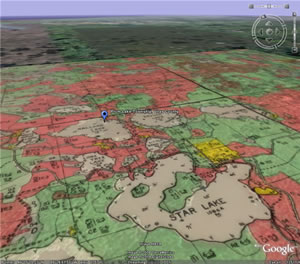 Completed in the earliest days of aerial photography, the inventory involved trained field workers traversing the land of nearly every Wisconsin county at half-mile intervals, recording a wide variety of land use and land cover information, along with nearly a century’s worth of human improvements, on field map templates following Public Land Survey System section boundaries.

The resulting section maps were later aggregated to produce large-format field maps and small-scale compilation books for each county surveyed. Today, the Bordner Survey maps are archived in the holdings of the State Historical Society’s Library-Archives Division, with partial collections in the UW-Madison Robinson Map Library, and also the UW-Madison Steenbock Library.

The evolution of digital preservation

From early aerial images to original land surveyor notes, digital preservation of historical geographic resources is on the rise. Since 2003, the complete collection of Bordner Survey county compilation sheets has been available for viewing online via the UW-Madison Libraries Digital Collections Web site. (See related article in the Fall 2003 Mapping Bulletin.) Except for small areas of the Survey occasionally used in a variety of GIS projects, there has been no effort to systematically georeference, manipulate, and display the maps in a modern online mapping client.

Recently, the mapping community has seen an explosion of consumer-oriented map services and free geographic viewers from major companies like Google, Microsoft and Yahoo!. These new developments offer increased usability and accessibility to a whole new wave of online map consumers. Parallel to the introduction of these interfaces, there has also been a surge of free or low-cost geographic data processing tools which support next-generation globe viewers (e.g. Google Earth), or online map-based Web sites known as “mash-ups”.

Over the last several months, I worked on these themes as part of an internship for the GIS certificate program at UW-Madison. My goals were:

A mix of software yields results

I used a variety of GIS and geoprocessing techniques in both commercial and open-source GIS software to make selected maps of the Bordner Survey compatible with Google Earth. Steps involved in mapping the six pilot study areas included: procuring and georeferencing desired map imagery, differentiating map collars from geography via command line processing, removing collars and creating seamless images of adjacent maps, creation of KML/KMZ tiled map overlays with Python scripting, replicating the map legends and metadata in Google Earth, and finally the creation of a dedicated project webpage. 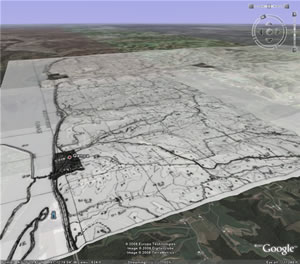 The Google Earth layers generated in this pilot project proved the feasibility of one method for historical mapping in what is essentially a mash-up, and as a technological demonstration was done in the spirit of the historical map preservation work of renowned collector David Rumsey. Anyone with an interest in online cartography, historical maps, map preservation, and land use/land cover in Wisconsin will find value in this collection of geographically-referenced historic maps. At this time no further work with the Bordner Survey is planned, though I hope to see more done with the maps if enough interest and demand exists.

Please contact me with any questions or comments about the WLEI / Bordner Survey mapping pilot project.