Editor’s Note: This story was written by Ted Sommer who works as a Professional Land Surveyor, Forester and Property Consultant in northern Wisconsin. The story was written in celebration of National Surveyors Week, 2014, and was used as an in-house effort to educate company employees about the history of the original US General Land Office (GLO) survey. 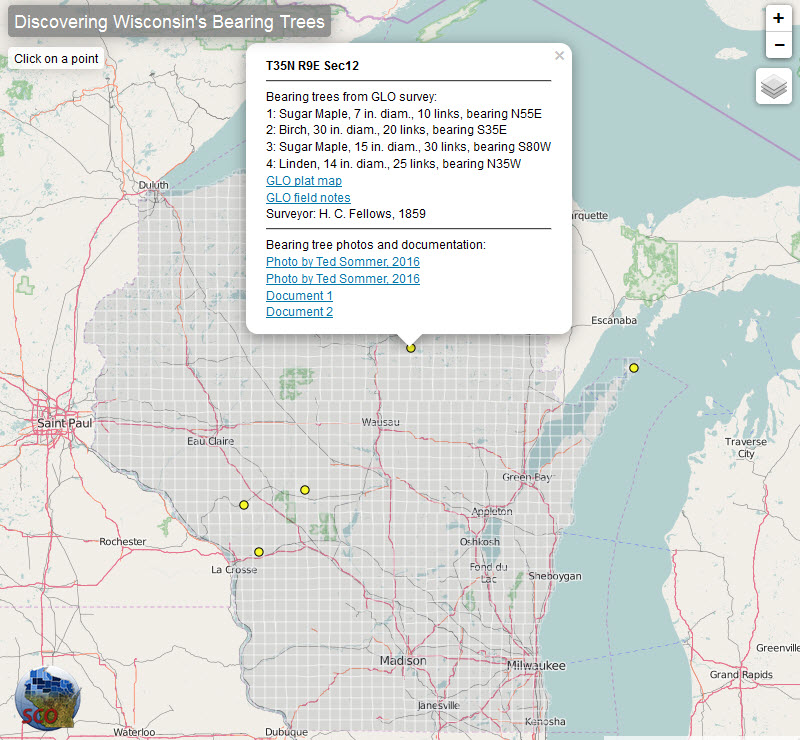 with photos and other relevant information. If you are aware of other

remaining bearing trees in the state, please send us a photo and

location so we can add it to the map.

Between 1832 and 1866, the GLO surveyed the area that would become Wisconsin. Surveyors divided the landscape into a grid of townships and sections, and documenting information about vegetation, soils, wetlands, and cultural features. At each section and quarter section corner, surveyors set a wooden survey post and identified up to four bearing trees. Each tree was “blazed” (marked) and its species and diameter was recorded in the surveyor’s notebook, along with the direction and distance to the tree from the corner post.

The GLO survey of Wisconsin – including field notes and maps — is available online (http://digicoll.library.wisc.edu/SurveyNotes/). In addition, the survey data has been digitized by researchers at UW-Madison and used to reconstruct historical vegetation patterns (http://dnr.wi.gov/wnrmag/2009/08/insert.pdf).

For comments about this story you are invited to contact Ted directly at tedthesurveyor@gmail.com.

If you have similar stories about other bearing trees being found, please contact us as well at help@sco.wisc.edu. 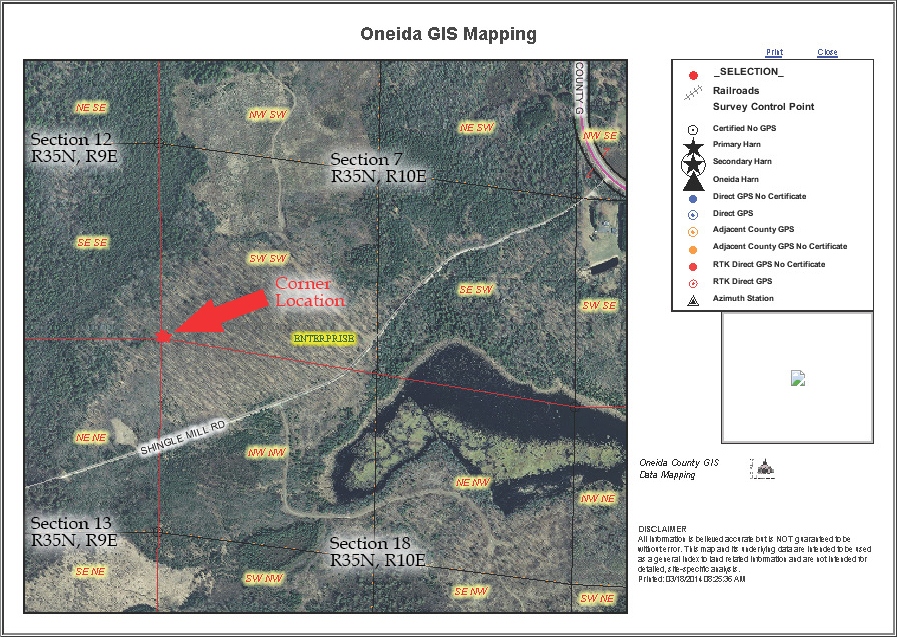 Here, after a short walk, you will find a 27-inch diameter, ±195 year old Sugar Maple standing as a gnarly witness to the section corner, a brass capped iron pipe. 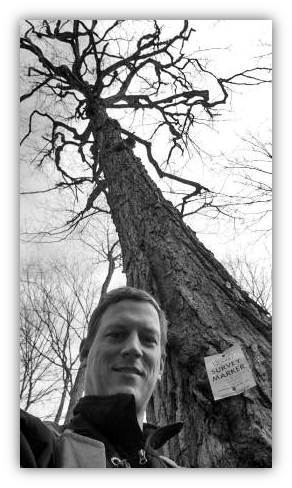 The Maple was “taken,” or blazed, as a bearing tree in 1859 by Surveyor H.C. Fellows while completing the original survey of the exterior of the township.  At that time the tree’s diameter at breast height (DBH) was 7 inches. (See field notes below.) 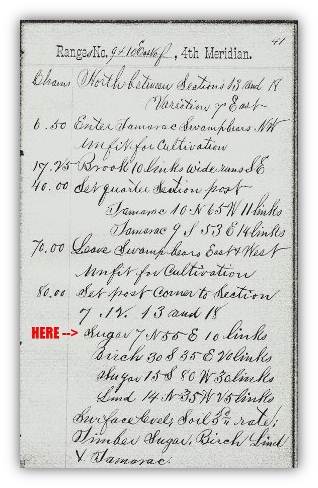 Source: Wisconsin Board of Commissioners of Public Lands,

and the University of Wisconsin Board of Regents.

In 1935, Oneida County Surveyor V.M. Maines noted that the corner was thought to be “lost” in 1895, but he found the Sugar Maple, now 20-inch DBH, with markings plainly visible and the remains of other original bearing tree stumps.  He set a brass capped iron pipe at the corner location (see V.M. Maines notes below). 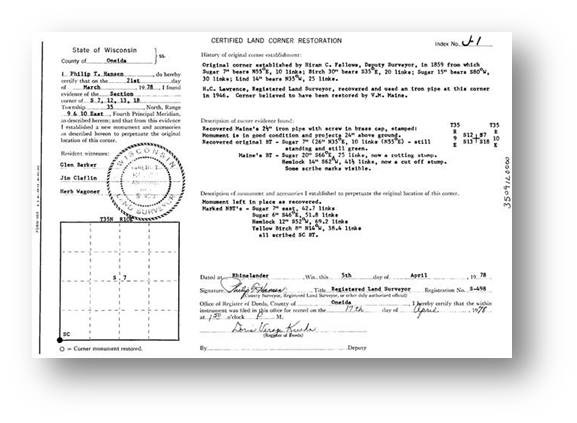 The corner was visited again in 2008 by Surveyor Jeff Austin and the bearing tree found to be live standing. The corner and tree certainly have been visited several times by foresters over the years as blue paint lines indicate. The grown-over blazes are visible as vertically oriented wrinkles or oval shaped seams in the bark, caused by compartmentalization of the man-made wounds to the tree.

If the tree is still alive (which it is, verified March 2016 with Channel 12), and assuming 40 years to reach a 7-inch diameter, we have a 1819 origin date for the tree and a 195-year-old green standing Sugar Maple with a 27-inch DBH. Pretty amazing especially in an area of industrial and county forest lands where bearing trees are commonly marked and harvested, even if by accident. Looking at the growth rates, the tree put on 13 inches of growth in 76 years to 1935. The next 43 years produced 6 inches of growth, and the subsequent 30 years produced 1 inch of growth

Around every section there are eight corners with perhaps a similar story just waiting to be told, like a grid of treasure hunts spread over the landscape. It is incumbent upon the retracing surveyor to record their findings to keep the chain of history intact and preserve corner positions as close as possible to the originals, and protect each corner’s story against the rigors of time.

Many times surveyors fail to look for evidence of the original corner or its accessories having convinced themselves they won’t find anything before leaving the office. Thorough work may very well uncover these bits of evidence which strengthens the history of the corner.

Another interesting aspect of the original surveys and the associated notes are the general descriptions of the landscape, timber, water features, and most importantly the suitability of the soils in the area. Most of the original surveyors were from the east, well-schooled, and had been trained to identify the flora and fauna of the region. Their observations were recorded and used to determine what the land in a region was well suited for. There have been efforts to utilize this information to recreate pre-European settlement vegetation maps. 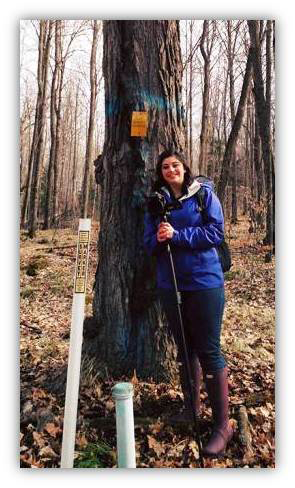 I visited this old bearing tree in March 2016 during National Surveyors Week along with Channel 12 in an effort to educate young surveyors and the general public as captured on this short video (http://www.wjfw.com/videoshare.html?video=17dad7f1fe6ac96d3e9536ea8458b0af6d1d36a8).