Readers who have been following the activities of the Wisconsin Spatial Reference System 2022 Task Force (or WSRS2022) will be pleased to learn that a compromise has been reached with the National Geodetic Survey (NGS) regarding plans for Wisconsin’s multi-layer State Plane Coordinate System (SPCS). The NGS is using the term “SPCS” to refer to up to three projection layers for each state: a single-zone statewide layer, a “traditional” SPCS layer composed of a small number of zones (three for Wisconsin) and a multi-zone Low Distortion Projection (LDP) system (such as WISCRS in the case of Wisconsin). 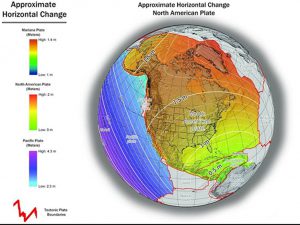 WSRS2022 was created in response to NGS’s plans to replace NAD 83 and NAVD 88 with the new NATRF2022 and NAPGD2022 reference systems. These new systems will cause coordinates in Wisconsin to shift over a meter horizontally and vertically, as well as introduce the idea of time-dependent coordinates due to movements of Earth’s crust. WSRS2022 consists of a number of focus groups handling various aspects of this change, including education, outreach, implementation issues, legislation and software. To date, most of the work of WSRS2022 has been on the technical aspects of the NGS change. 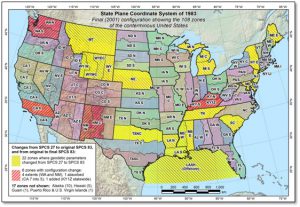 In August 2019, WSRS2022 entered into discussions with NGS with the intent to achieve a three-layer system including a statewide zone based on Wisconsin Transverse Mercator (WTM), a three-zone system modeled on the current state plane system, and a multi-zone layer based on WISCRS. This effort included a survey of the Wisconsin geospatial community for feedback on the use of the classic three-zone state plane system to determine the impact of losing this layer to comply with NGS policies. 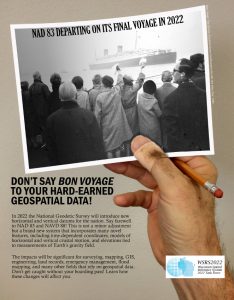 The elimination of the classic three-zone state plane layer was a difficult decision that was settled on only after efforts to keep all three layers were unsuccessful. However, it is important to note that even if Wisconsin elected to keep a three-zone layer in the 2022 system, users would still be faced with having to convert data due to the new datum. While a three-zone system is important, the Task Force determined that it was more critical to ensure that WISCRS (as modified for 2022) would be available in NGS conversion tools and data sheets moving forward.

The next step for WSRS2022 is to submit proposals to NGS by March 31, 2020, to affirm our agreement on the single-zone layer and signal our intent to submit a design proposal for the multi-zone LDP system in 2021.

WSRS2022 is also considering the possibility of designing a 2022 version of the current Wisconsin three-zone state plane system to provide continuity for users. If designed, this system would not be recognized by NGS but could be cataloged officially in the international EPSG database.

Now that the agreement with NGS is in place the Task Force will be spending more energy on outreach, education, implementation issues, and software and legislative impacts.

The Task Force will also be addressing the implications of another change: the deprecation of the US Survey Foot by NGS and the National Institute of Standards and Technology.

Please plan to attend the WSRS2022 90-minute session on Friday, February 21 at the Annual WLIA Conference in Middleton to learn more, or visit the WSRS2022 webpage.