Note: Mick Heberlein at the WisDOT Office of Surveying & Mapping provided the content for this article, including text and tables.

With the delay in the rollout of the modernized National Spatial Reference System (NSRS), the National Geodetic Survey (NGS) has announced that the GPS on Bench Marks deadline has been extended again, this time to the end of September, 2023. A previous extension was to December 31, 2022.

According to an NGS press release: data submitted before the new deadline date will be considered for use in the 2020.00 Reference Epoch Coordinate (REC) adjustments; data that passes through the adjustment quality-control process will be used to assign REC coordinates on marks in the modernized NSRS; and marks with valid coordinates in both NAVD 88 (North American Vertical Datum of 1988) and NAPDG2022 (North American-Pacific Geopotential Datum of 2022) will be used to create the transformation grids that will be released with the modernized system.

In Wisconsin the GPS on BM campaign is being coordinated by the Wisconsin DOT (WisDOT) under the “GNSS Observation on Passive Stations Project.” Many non-DOT partners are involved in the project.

The NGS progress dashboard can be found here.

The WisDOT GPS on BM status map can be found here.

NGS has divided the entire nation into a series of 10-km hexagons, with the goal of getting at least one observation per hexagon. There are 1843 hexagons in Wisconsin. Hexagons are completed as a result of either an OPUS (NGS’s Online Positioning User Service) shared station observation or a station submitted to NGS via Bluebooking within the hexagon.

Table 1 shows activity since September, 2020. All remaining hexagons contain non-Wisconsin Height Modernization NGS stations, vertical-only benchmarks, or are have stations that are not GPS-able. 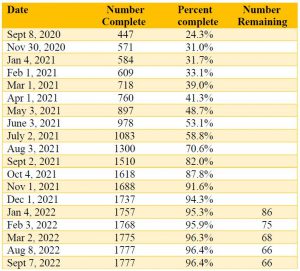 Wisconsin has gone from only 66 OPUS shared observations two years ago to over 4200 today. Progress is shown in Table 2. 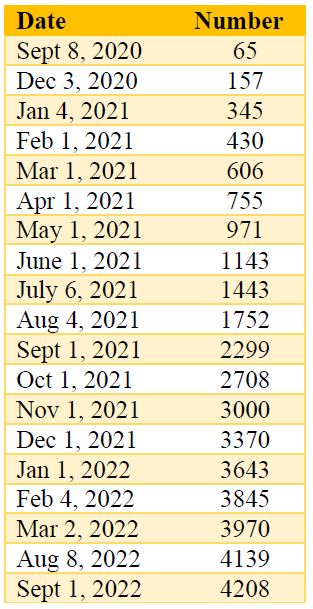 NGS has produced a prioritized list of bench marks where additional GPS data would be helpful to help define the new 2022 Geoid model. Providing GPS on stations with leveled elevations will help to relate the GPS derived ellipsoid height with the leveled elevation of these marks. The stations on the Priority List are chosen by computer generated algorithms based on station location and metadata without regard to its status as a WI-HMP station. The status of Wisconsin’s priority list is given in Table 3. 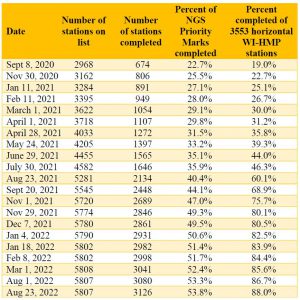 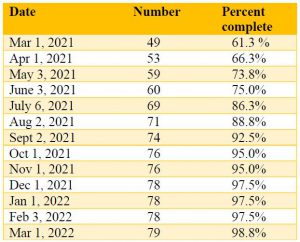 Note: The remaining station in Milwaukee county has been destroyed.

For more information you can contact Mick Heberlein at the WisDOT or Jacob Heck with NGS.