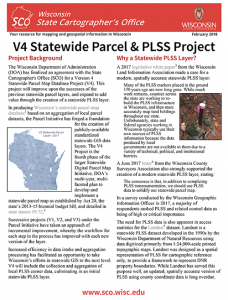 Increased efficiency in data intake and aggregation processing over previous phases of the parcel initiative have provided an opportunity to take Wisconsin’s efforts in statewide GIS to the next level. Thus V4 will include the collection and aggregation of local Public Land Survey System (PLSS) corner data, culminating in an initial statewide PLSS database.

Proportionally, the largest segment of Land Information Program funds that counties devote to land records modernization is used for PLSS completion and integration. Those counties using grant funds for PLSS are required to integrate PLSS corners into the county parcel network. Continued investment in PLSS will lead to enhancements in parcel map accuracy, one of the most important of the foundational layers. 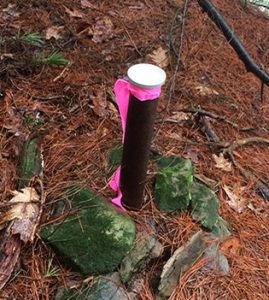 Landnet, Wisconsin’s current statewide PLSS database, was developed in the 1990s by the Wisconsin Department of Natural Resources (DNR) to provide a framework to represent DNR property boundaries. Landnet was designed as a spatial representation of PLSS for cartographic reference only, and was derived mainly from printed 1:24,000-scale topo maps. Similar limitations apply to other PLSS representations, such as the Bureau of Land Management’s national PLSS database for Wisconsin. While Landnet has served its purpose well, an updated and spatially accurate version using county coordinate data is long overdue.

In 2017 the Wisconsin Land Information Association published a legislative white paper supporting the idea of an updated statewide PLSS database. This paper notes that while counties across the state are working to re-build PLSS infrastructure, state and federal agencies working in Wisconsin often must use their own sources of PLSS information because the data produced by local governments are not available to them.

A June 2017 letter from the Wisconsin County Surveyors Association also strongly supports the creation of a modern statewide PLSS database, stating that the “consensus is that, in addition to completing PLSS remonumentation, we should use PLSS data to solidify our statewide parcel map.” 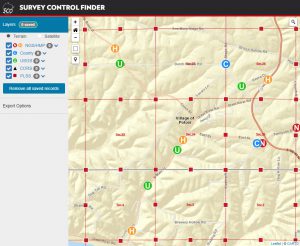 The statewide PLSS effort will build on the SCO’s long-standing commitment to collecting and distributing statewide PLSS and geodetic control data. The SCO’s Survey Control Finder app is the current access point for much of the state’s local PLSS point data. However, to better leverage the benefits of PLSS, additional attributes need to be collected along with PLSS polygon boundaries and historical coordinate values and methods.

V4 will produce a preliminary “Version 0” statewide PLSS corner point database, which will evolve over time into a more complete database containing polygons. The goal is to use accurate county coordinate data wherever available. A long-term goal is to develop the capability for automated data updates, to allow the most current county data to be available to users. As with statewide parcel data, users will be directed to consult local governments for the most current local data.

Work will begin later this year to engage with producers and consumers of PLSS data in the state to develop an initial PLSS data specification.

Please see our Infosheet for more information, or contact Howard Veregin (608-262-6852) with questions.