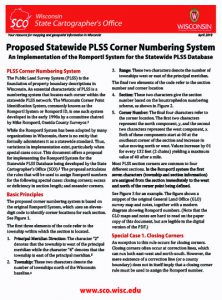 [Note: This publication has been superceded by a 2nd version. See this news article for more information.]

A new publication by the State Cartographer’s Office (SCO) offers a proposal for implementing the Romportl System for the statewide Public Land Survey System (PLSS) database being developed as part of the Statewide Parcel Map Project.

The Romportl System or Romportl ID — more formally the Wisconsin Corner Point Identification System — was developed in the early 1990s by a committee chaired by Mike Romportl, Oneida County Surveyor. While the Romportl System has been adopted by many organizations in Wisconsin, there is no entity that formally administers it as a statewide standard. Thus, variations in implementation exist, particularly when special cases occur.

The proposal articulates the rules that will be used to assign Romportl numbers for the statewide PLSS database for the following special cases: closing corners; excess or deficiency in section length; and meander corners.

Our goal is to apply a consistent approach to all special cases in the statewide PLSS dataset to ensure a standard Romportl System implementation.

The document contains examples of exceptions found across Wisconsin, with reference to the original Government Land Office plat maps and survey notes created in the 19th century.

As of this date the statewide PLSS database is still in development. Before final decisions about PLSS corner numbering are made, we are seeking your input. If you have insights into special cases that have not been identified in this document, or have general comments or suggestions, please contact us the SCO: Phone (608) 262-3065; Email help@sco.wisc.edu.